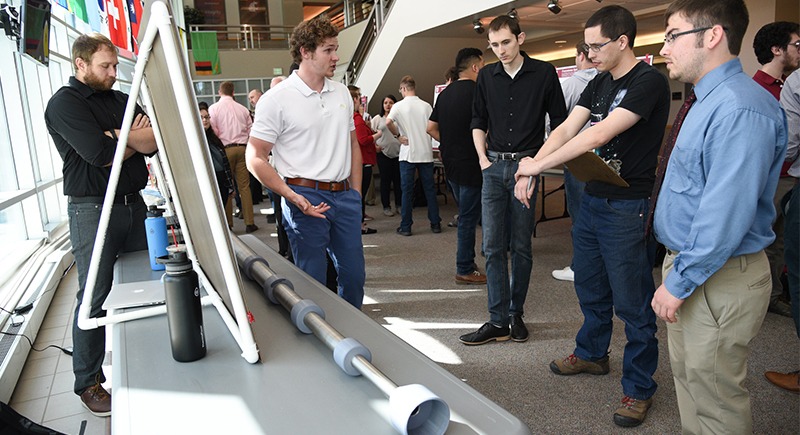 Interested in a career in engineering? Check out the ABET-accredited and nationally recognized WSU Tri-Cities engineering programs at tricities.wsu.edu/engineering.

RICHLAND, Wash. – A team of Washington State University Tri-Cities student mechanical engineers partnered with Washington River Protection Solutions (WRPS) to design a prototype of an instrument that could one day be implemented to assess the exact location, amount and arrangement of solid radioactive waste in Hanford tanks. 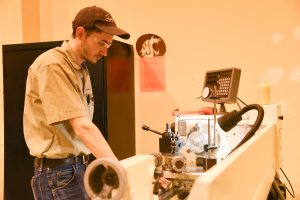 WSU Tri-Cities student engineer Bryan Chronister works in the engineering high bay to craft an instrument prototype that could one-day be used in Hanford tanks.

The device could solve a significant challenge out at the site, providing engineers and scientists at Hanford with a three-dimensional and much more reliable picture of the layout of solid waste. The device would allow them to better assess and prepare for situations at the site in the future, as compared with their current methods.

Currently, WRPS use devices that measure only one location in the tanks. They use either a sludge weight or other device that must sink down to the bottom of the liquid level of the waste in the tanks to determine the level of the solid waste. The current devices, however, do not provide information about the solids level at other locations in the tanks, the students said.

For their senior design capstone project, the student group, comprised of Bryan Chronister, Tanner Reyff, Rayce Barnes and Tomokazu Hager, designed a deploying system known as SLIM, or Solid Liquid Interface Monitor, that resists radioactive contamination and decay, and can be telescoped to different depths of the tank that uses a sonar device to get an accurate picture of the tank. The device could be left in the tanks and serve as a long-term solution in creating a reliable picture of the placement of the waste in the tanks, Reyff said.

“Currently, we have a 35-foot design from grade level, which is ground level, where it is submerged into the liquid level of the waste, and takes about five minutes to do a full scan of the tank with the sonar device,” Hager said. “Essentially, it creates a topographical scan of the full tank, which can be used for a range of future uses out at the Hanford Site.”

The student group spent their first semester developing four different designs, which they consolidated into one seamless design. 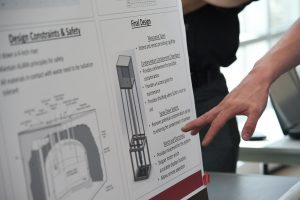 A team of student mechanical engineering students took four different designs they had each developed and combined them into one for a prototype that could one-day be implemented at the Hanford Site.

The team’s final design uses a winch to lower a telescoping tube into the supernatant, or liquid waste, that contains an existing sonar device that has been proven to withstand radioactive exposure. The tubing is encapsulated in a chamber that protects the outside environment from radioactive contamination. When the device is removed, it has a high-impact spray system that washes the tubing as it is being removed and also further reduces potential for contamination.

“We created a rigid design that provides control to the depth that is required and a stable insertion that would produce an accurate image of the solid waste within the tanks,” Reyff said. “The goal was to minimize the amount of radiation exposure that is also remotely operated.”

Supporting students to invest in the future

WRPS’ primary goal is to reduce the environmental risk posed by 56 million gallons of radioactive and chemical waste stored in 177 underground tanks at the Hanford Site that dates back to as early as World War II. The organization partners with WSU to develop technology to support that mission, as most technology must be specifically tailored to their needs due to the unique origins of the site as the home of the first large-scale nuclear reactor in the world.

Kayle Boomer, manager of the Technology Management and Field Solution group with WRPS’ Chief Technology Office, said he is impressed with the student’s design and that is has potential for out at Hanford. 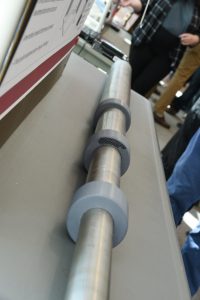 Students utilized engineering facilities at WSU Tri-Cities to create a device prototype that may one-day be implemented out at the Hanford Site.

“The team worked well together,” Boomer said. “They were very diligent and tried to ensure that the design addressed as many design requirements as possible. The other Hanford engineers working with them thought they were developing a workable design for the tank farm.”

WRPS provided the student group, as well as one additional student engineering group, with a total of $10,000 to develop prototypes that could one day be applied out at the Hanford Site. The other student group, which is comprised of students Anthony Jenkins, Melissa Rivas, Oleg, Tyshchuk and Michelle Wheeler, developed a device to sample any interface within the Hanford tanks.

“It was a great experience working with the WSU senior engineering students on their senior design project,” said Jon Barnes, design services engineer for WRPS.  “Their energy and creativity was infectious. I’m hoping I’ll see them again in the engineering work world, and perhaps get a change to work together as peers.”

Jason Vitali, chief technology officer for WRPS, said the solutions identified by the students during their capstone project are extremely creative, thorough, and have the potential for resolving some of the challenges they encounter in the high-hazard environment.

“It is important that the students continue to tackle real-world challenges during their education so they are able to transition after school and make contributions early in their professional careers,” he said.

Interested in a career in engineering? Check out the ABET-accredited and nationally recognized WSU Tri-Cities engineering programs at tricities.wsu.edu/engineering.