Smoke gets in your wine 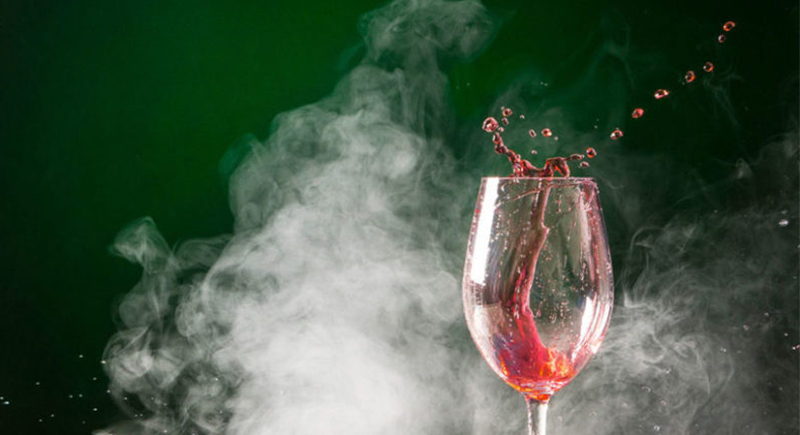 As microscopic particles and liquid droplets ooze and eddy through the vineyard, grapes are coated with toxic chemicals. Worse, smoke from forest and range fires manages to get into the plant itself, wreaking havoc with the plant’s internal chemistry.

In self-defense, grape vines attempt to sequester toxic smoke particles that infiltrate berries and leaves by binding sugar molecules to the offending invaders. The plant can then metabolically shuffle the sugar-trapped particles into places where the smoke won’t be as harmful to the vines’ mission: produce grapes and reproduce.

Humans interfere with the vines’ mission when we harvest grapes for wine. Making wine from smoke-tainted grapes, though, is a frustrating enterprise. According to the Washington State University wine science team, smoke-tainted wines are in danger of developing “unpleasantly ‘pharmaceutical,’ ‘dirty,’ ‘ash tray,’ ‘medicinal,’ ‘camp fire,’ or ‘burnt’” flavors and, to add insult to injury, the taint compounds “reduce the perception of varietal fruit aroma.”

The tainting compounds can’t be washed off. With much less overall skin contact, the juice from white grapes can be quickly extracted and clarified. But, to get the color right, red wines are made with prolonged contact with skins, so taint compounds are a permanent part of the wine.

Filtering and fining techniques have been used to try to clear the juice of offending chemicals but, as Tom Collins, a wine chemist based at WSU Tri-Cities, says, the problem is much deeper. Sugar-sequestered smoke particles are very similar to other desirable compounds. Filtering techniques, such as reverse osmosis, remove both the good and the bad compounds, resulting in a wine that Collins charitably describes as “neutral.” This bland concoction could be blended with unaffected wines to produce something consumable but, even then, trouble lurks.

Over time, the acidity of bottled wine cleaves the sugar from the particle, releasing a new wave of off-flavors and aromas.

Collins points out that not much is really known about smoke taint — except that it tastes nasty and can have a negative impact on the bottom lines of both growers and winemakers.

Collins and his team are engaged in an ongoing project that seeks to answer several big questions: How much smoke exposure, and at what period in grape development, is too much? And what can be done to clean up tainted fruit so that it can be used to make a useful product?

Collins and colleagues have constructed an in-vineyard method of controlling and testing smoke exposure, with the aim of answering the first question. And the second, he suggests, might lie in spit.

Since the enzymes in our saliva can cleave sugars entrapping smoke particles, perhaps a process could be developed using similar, non-saliva derived enzymes to liberate the sugars from the smoke particles, which then might be filtered out by one means or
another.

Research-wise, it’s early days — but the pressure is on. Fires in Australia, California, and Washington state threaten a beloved industry and there is much interest in finding ways to salvage fine wines from tainted grapes.