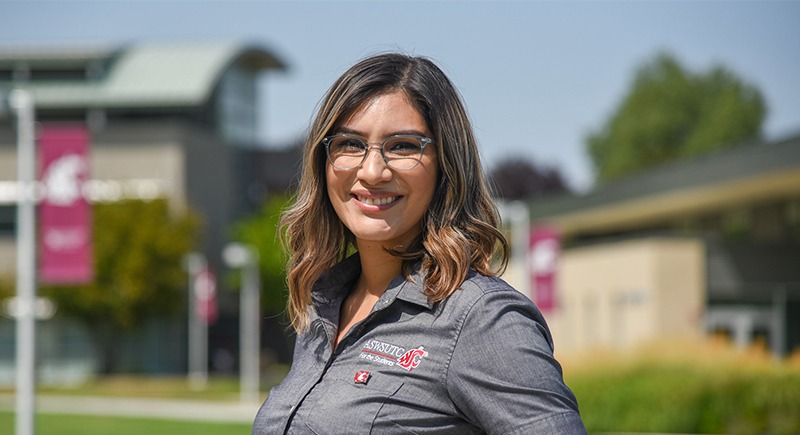 RICHLAND, Wash. – Washington State University Tri-Cities student Savanna Navarro Kresse was honored this month with a national award for her work in increasing student democratic engagement on campus and in the regional Tri-Cities community. 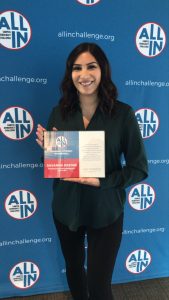 Savanna Navarro Kresse received the ALL IN Challenge “Honor Role” award, which is presented to 10 students that help college students to improve nonpartisan civic learning, political engagement and voter participation.

Kresse earned an “Honor Role” award through the ALL IN Challenge Awards program, where she was invited to be honored in Washington, D.C. She was selected as one of 10 students for the category, which specifically recognizes student leadership in helping college students to improve nonpartisan civic learning, political engagement and voter participation.

Kresse, vice president for the Associated Students of WSU Tri-Cities and a senior history major, was instrumental in bringing a ballot drop box to campus in partnership with the Benton County Auditor’s office. She has also led a series of events geared toward getting students registered to vote, in addition to partnering with her fellow student government peers to hold voting celebration days on campus.

She worked with Washington state Attorney General Bob Ferguson’s office to host a presentation on DACA and immigration regulations last academic year. She helped organize a city council debate prior to the mid-term election last year. She also brought the Association of Women Voters to campus for an event pertaining to voter registration.

Kresse is active in discussions about the Title IX of the Education Amendments Act of 1972, which prevents discrimination based on sex in educational programs. She previously represented the Washington Student Association on a state-wide taskforce on the federal legislation civil rights law. She also completed a political science project, examining the law, as well as how to better handle issues pertaining to discrimination, which she presented at the WSU Tri-Cities Undergraduate Research Symposium and Art Exhibition.

Kresse is passionate about providing access to civil discussions and participation, and additionally has worked with her student peers to organize female mentor panels to shed light on women’s issues in the workplace, organized initiatives to increase student access to food in light of food insecurity on college campuses, and more.

Earlier this year, Kresse was honored with WSU’s MLK Distinguished Service Award for her commitment in educating others about human rights, social justice and for putting her own foot forward to make a difference in her local community.

Chris Meiers, Vice Chancellor for student affairs, said Kresse continually takes a leadership role in making sure all students have the access and resources they need to be successful, and is a champion for student and individual success. 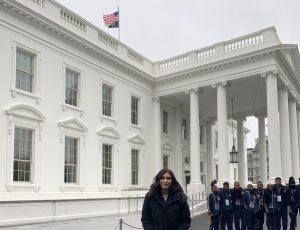 U.S. Rep. Dan Newhouse’s office organized a White House and capitol tour for WSU Tri-Cities student Savanna Navarro Kresse while she was in Washington, D.C., to accept her award.

“Her leadership and passion for providing access in positive change is evident to everyone around her,” he said. “We are incredibly proud of the work she continues to display at WSU Tri-Cities and her local community. She is an inspiration to her fellow students and has created many lasting legacies at WSU Tri-Cities.”

Kresse said she wasn’t expecting the honor or knew that she was even nominated for the award, initially. When asked why she gives back to her community, she said that she is grateful for the opportunity to serve her fellow students.

“Often times we tend to think that the system is too big, and we are too small,” she said. “But when we recognize our ability to make positive change through relationship building and a spirit of willingness, nothing can hold us back.”

Kresse is a first-generation student, mother four and a former seasonal field worker. She continually uses her background as inspiration for overcoming barriers for education where she aims to grow resources available to those from all backgrounds.