Wine and fungi: The perfect pairing? 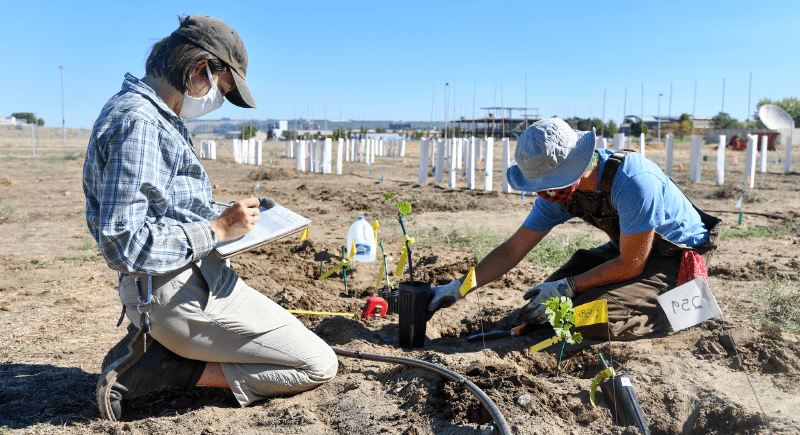 A team at Washington State University Tri-Cities is researching the impact that a type of fungus could have on vineyard growth and associated nutrient uptake, which could lead to less watering and less fertilizer required for a successful grape crop. 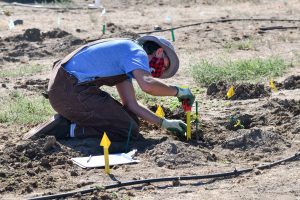 WSU Tri-Cities graduate student KC Cifizzari measures a wine grape plant as part of an experiment to measure the effect of fungi on grapevine growth and health.

Tanya Cheeke, assistant professor of biology, was awarded a $25,000 grant by the Washington State Grape and Wine Research Program to support a series of greenhouse experiments, as well as a two-year $40,000 grant to support a field experiment from the BIOAg program of the WSU Center for Sustaining Agriculture and Natural Resources.

Cheeke is working with graduate student KC Cifizzari and undergraduate Dylan Hartwig on the project specifically to understand the role that arbuscular mycorrhizal fungi, or AM fungi, play in plant nutrition and production for grapevines.

About 85 percent of all plant species, including most crop plants, have an intimate relationship with AM fungi, Cheeke said. The naturally-occurring soil fungus forms a dense network of connections with the plant by inserting tiny threads, called hyphae, into its roots. Through this shared connection, the plant sends food to the fungus and the fungus increases water and nutrients available to the plant. AM fungi usually enhances plant nutrient uptake from the soil.

Cifizzari said they are including phosphorus treatments to see if the grapevines grown with AM fungi do just as well as plants that are only given fertilizer. If grapes grow as well with additional AM fungi and a lack of additional phosphorus as the grapes given only phosphorus, then adding AM fungi could reduce how much fertilizer vineyard managers need to apply to their vines, they said.

“The nice thing about AM fungi is that they are living organisms and the treatment should be self-renewing,” Cheeke said. “With fertilizers, you have to reapply regularly to get the same effect. That can be expensive.” 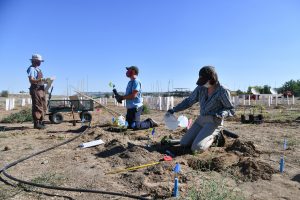 Merlot grapes are a popular varietal in Washington and were shown to respond more strongly as part of a greenhouse experiment by Cheeke and her team as compared to another varietal studied – Chardonnay.

Cheeke said the variability between varieties of crops is not uncommon, however, the researchers also caution that greenhouse conditions don’t necessarily mimic field conditions. Future research will investigate this further. A second greenhouse experiment to evaluate the effectiveness of different commercially-available AM fungi products is ongoing this fall.

“We will compare the growth of grape vines grown with three commercially-available AM fungi products, soil from a natural sagebrush habitat, and soil from a 50-year old vineyard,” Cheeke said.

The results of this study could help Cheeke know which AM fungi products to recommend to vineyard managers, if results prove successful. 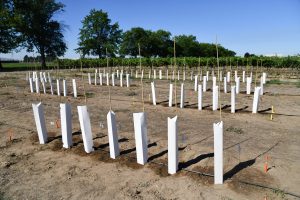 Both Cheeke and Cifizzari are interested in the role that AM fungi could play in sustainable agriculture. Agricultural crops usually have reduced colonization of AM fungi because practices like applying fungicides and tilling the soil can deplete naturally-occurring sources of these fungi. Without their fungal helper, agricultural crops can require more water and fertilizer to be productive and can be more susceptible to plant diseases.

“Grape growers are very interested in the potential benefit of AM fungi, but they need more information to feel comfortable using it.” Cheeke said.

“Adding AM fungi to vineyard soils could be a way to make agriculture better for the health of the land and the people who work it,” Cifizzari said.