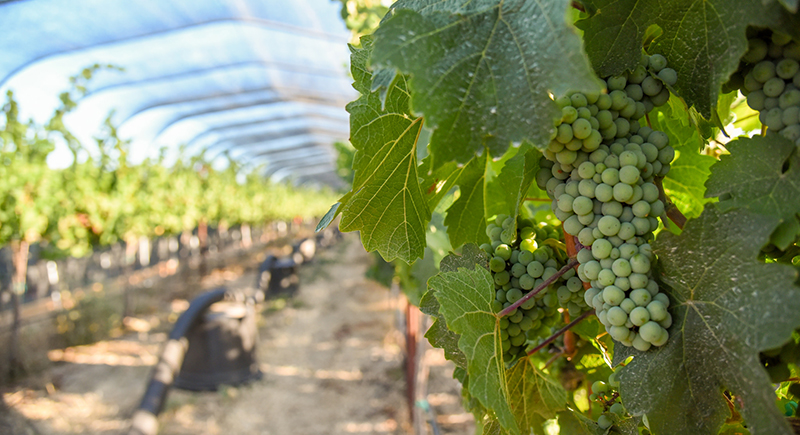 Wine is a $2 billion industry in Washington state, but many students will not be exposed to the science behind the field as a possible career option until they reach college. Thanks to the Partners in Science program, however, one high school teacher had the opportunity to shadow and complete research alongside a renowned wine science researcher and professor at Washington State University Tri-Cities – the science behind the experience, of which, he is now introducing to his high school students. 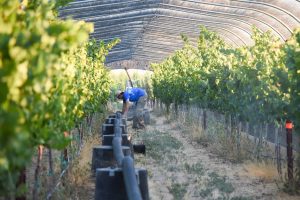 Fred Burke, science teacher at Chiawana High School, sets up equipment for a smoke taint trial at the WSU Prosser Research Extension vineyards. He was paired with Tom Collins, assistant professor of wine science at WSU Tri-Cities, to complete wine research the last two summers at WSU Tri-Cities as part of the Partners in Science program.

Fred Burke, a teacher at Chiawana High School, had the opportunity to shadow and complete research with Tom Collins, wine science researcher and assistant professor of wine science at Washington State University Tri-Cities.

“This experience has allowed me to show my students how the nature of science is more than what they experience through a text book and allow them to experience the techniques and capabilities of it in a real-world setting,” Burke said. “It has not only allowed me to participate in research that will have an impact in the wine industry today, but it also it makes doing science a lot more fun for my students.”

Through the Partners in Science program, which is supported by a $15,000 grant from the MJ Murdock Charitable Trust, high school teachers are paired with a university professor in their field and the pair spends two consecutive summers completing research. During the end of each summer experience, the teachers prepare a presentation on their research and how they plan to implement what they learn into their classroom setting. The university professors also get the value of an additional hand in the lab and in the high school teacher’s second summer, an experienced lab researcher to help with their studies.

As part of his research experience, Burke worked with Collins to characterize wine grape varieties using sophisticated research techniques known as gas chromatography and mass spectrometry. For the techniques, the researchers use devices that allow researchers to look into the intricate chemical and other properties of each type of grape for classification and categorization. Burke also had the chance to work with Collins to start a study analyzing the impact of wildfire smoke on wine grapes, which could hinder the taste and overall quality of the wine. 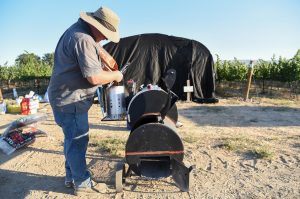 “Both projects are relevant to the classes we’re teaching,” Burke said. “In environmental science, we’re able to look at how the smoke impacts not only the wine grapes, but also the chemical components and properties of the wine.”

The study of the impact of wildfire smoke on wine captured the interest of the Washington wine industry, with Collins stating that since they announced they were completing the research, he gets calls throughout the year on updates for the research, results they’ve tabulated and generally how they can protect wine grapes from the exposure. The interest grows each year as the summer wildfire seasons commence.

“We got three calls today, alone, regarding smoke taint,” Collins said. “The fact that Fred has been able to be a part of this project provides him with a great in-depth look at how lab and field research have a substantial impact on industry. The Washington wine industry increases exponentially year, with the mid-Columbia region being a hub for the industry. So this research is crucial for our area’s winemakers.”

Last summer during Burke’s first of two summers working with Collins in the lab, the duo set up experiments at the WSU Prosser Research Extension to test different amounts of smoke on grape vines. They are now in the process of analyzing samples collected from that experiment. Collins plans on continuing the study for at least the next several years.

“Just being able to look at all the parts that go into a real-life field of scientific study has been immensely beneficial,” Burke said. “I get to share that with my students and they benefit from that real-world application. Within their science classes, our students have to conduct procedures, collect data and analyze that data through labs and lessons. This real-world experience allows me to show them that what they’re practicing in class can be applied out into the field, as well as provide them with concrete examples of stuff we’re actively doing in the labs.”

Burke also had the opportunity to bring some of his classes out to the Ste. Michelle Wine Estates WSU Wine Science Center to see how the research is conducted and get an idea of how a research lab operates.

“Science in agriculture is kind of one of those unknowns for many of my students,” he said. “They see people planting and watering, but they don’t know the science behind it. This provides them with an in-depth look. It’s a career option that most of my students probably have never even considered.”

Burke plans to apply for a supplemental grant from the Partners in Science program, which would extend his research partnership time frame with Collins and provide Burke with dollars for science equipment for his classroom.

“It would provide us with more money for use in the classroom, which would allow my students to conduct some research of their own,” he said. “It’s a great opportunity.”