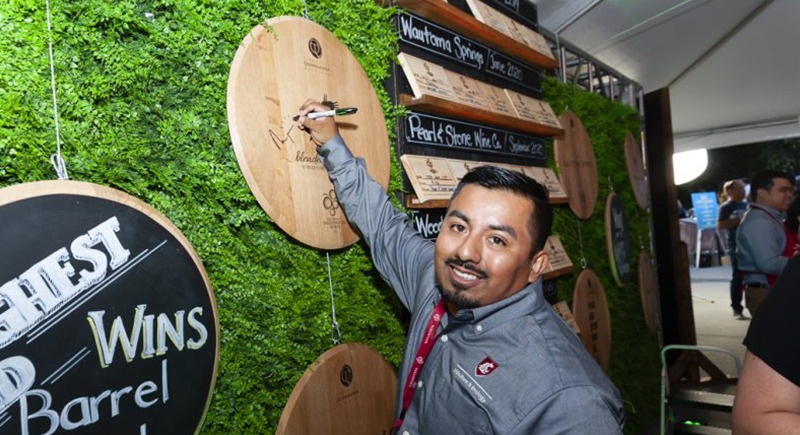 Gratitude and humility: Those traits don’t often define a 4.0 GPA student who has created his own blockbuster wine, and who holds the honorific of Wine Spectator Student of the Year. But those are precisely the traits that describe Noel Perez (’20).

A first-generation college student and the middle-child of three, Noel grew up learning the twin values of hard work and education in Washington’s Walla Walla valley. 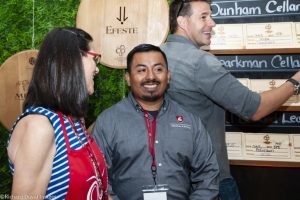 “Agriculture has always been part of my life,” Perez said. “When I was a kid I would go with my parents to go pick apples, onions, asparagus, and cherries.”

His first foray into the wine-making business began shortly after high school in a facility that processed some 24,000 tons of grapes annually. He loved every part of the job, and could have easily made a comfortable living in that part of the industry.

But when his father passed away, Perez knew he had to go back to school. Having completed the College Cellars program at Walla Walla Community College as the youngest in his class, Perez entered WSU’s Viticulture & Enology Program in 2017.

“Education was a way to honor all the hard work my father and family had instilled in me,” he said.

Unlike most people who enter the wine industry at an older age—often as a second career, or following a military deployment—Perez quickly discovered that his years of hands-on experience afforded him the benefit of perspective.

“I did the backwards path,” he joked. “If you want to get into the wine making industry,” he added, “go do a harvest first, before you step into a school. Then you’ll know if it’s in your heart or not. The job is far more than wine tasting. There is a lot of blue-collar work involved.”

Starting the V&E Program, Perez immediately showed his academic prowess, winning scholarships such as the Walter J. Clore scholarship from the Washington Wine Industry Foundation. His love for academics, he said, comes from his mother.

“My mom always said, ‘No matter what you do in life, be educated. Push through.’”

Honoring his mother’s charge, Perez set out on his most ambitious project yet: making his own wine in WSU’s Blended Learning class, taught by Thomas Henick-Kling, professor and Director of the V&E Program.

“I wanted to make something different,” he said. “So, I proposed making a Sangiovese for the school before I graduated. I couldn’t let myself leave here without doing that.”

Settling on that particular wine was significant because no other student in WSU’s V&E Program had yet made it.

“Noel’s Sangiovese was one of several projects students carried out in several wineries that year,” Henick-Kling said. “Noel knew where to source excellent fruit and how to make an outstanding wine from it.”

Still, the bar was very high. “All wines produced in the Blended Learning class must be excellent,” Henick-Kling added.

“I’ve produced a lot of wines,” Perez allowed. “But nothing with my name on the label. So, I put my whole heart into it.”

Because Sangiovese is one of his favorite varietals for its character and crimson color, Perez knew exactly what he wanted from his signature wine.

“I wanted to make a wine with a little higher alcohol but with a lot of fruity notes and spicy character, but not too overwhelming.”

In the spring of 2019, Thomas Henick-Kling, professor and Director of WSU’s V&E Program, called Perez into his office for a meeting.

“At first, I thought I was in trouble,” Perez joked. Then he thought the meeting might be about his Sangiovese project. But it wasn’t about his signature wine.

“That’s when they told me I was the Wine Spectator Student of the Year.”

Perez was stunned. “I froze,” he said. “I thought they were kidding, because there are so many good students here. I couldn’t believe it.”

In 2017, Wine Spectator donated $1 million to the WSU Viticulture and Enology Program to help establish the resources for teaching, research, and scholarships. The Student of the Year award includes a $15,000.00 scholarship from the Wine Spectator Scholarship Foundation and is awarded annually to a V&E student in recognition of their academic achievements and contributions to the wine industry.

Wine Spectator is a print and online publication, with approximately 3 million readers worldwide. The flagship magazine examines the world of wine from the vineyard to the table, exploring wine’s role in contemporary culture and providing expert reviews.

When he told his mother, she was overwhelmed. “She cried her eyes out,” Perez recalled.

But Perez’s backward path to success didn’t end there. Last August, his Sangiovese received top honors and recognition at the Auction of Washington Wines’ annual Winemaker’s Picnic & Barrel Auction, where it competed handily with the state’s leading labels.

In the end, five cases of his Sangiovese sold for a whopping $9,155. The proceeds are part of the total revenue the Auction of Washington Wines raises to support the WSU Viticulture & Enology Program.

When asked what his mother thought of his latest achievement, Perez said, “She told me to stay humble, and to remember where I came from.”

The question now is, where will he go?

“There are so many different options after I graduate. Eventually, the plan is to create my own label, and to create a company where I can take everything I have learned in work and school and bring it all full circle.”