RICHLAND, Wash. – A team from Washington State University Tri-Cities whose business plan is to commercialize a WSU-patented jet fuel technology developed by WSU Tri-Cities professor Bin Yang’s lab has advanced to the University of Washington Business Plan Competition’s “sweet 16” round. 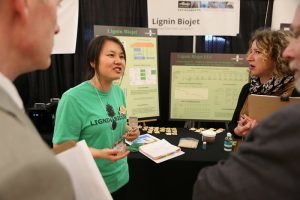 According to the university website, the goal of the UW Business Plan Competition is to promote student ideas and new venture creation and provide an opportunity for business and science students to present new business plans to Seattle-area venture capitalists, entrepreneurs and investors.

The team, composed of Libing Zhang, a recent doctoral alumna, and master’s in business administration students Manuel Seubert and Taylor Pate, presented the process of taking lignin, a waste product in the cellulosic ethanol biorefineries and pulping process that is considered one of the most abundant renewable carbon sources on Earth, and turning it into an environmentally-friendly, cheap jet fuel that can potentially reduce the carbon emissions for commercial airlines.

The WSU Tri-Cities team advanced from an initial pool of 82 teams in the screening round of the competition, which was then narrowed to a pool of 36 teams in the investment round before the team advanced to the sweet 16. During the investment round, each team had approximately four hours of face time with entrepreneurs, angel investors, venture capitalists and competition alumni from the Seattle area.

Last month, the same WSU Tri-Cities team placed third at the Alaska Airlines Environmental Innovation Challenge. Zhang is also the entrepreneurial lead on a National Science Foundation I-Corps lignin-to-biojetfuel project, which was awarded to Yang and his team.

The sweet 16 round of the UW Business Plan Competition kicks off May 25, followed by the final round that afternoon. The final round is open to the public. Prizes will be awarded later that evening at the competition dinner at MOHAI in South Lake Union.