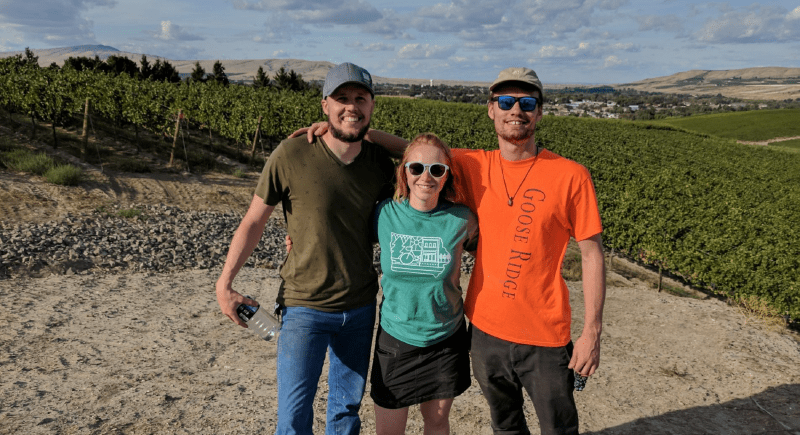 RICHLAND, Wash. — Sun exposure and soil temperature can affect the final flavor of wine. Students in WSU’s Viticulture & Enology program put this to the test by monitoring two cabernet sauvignon grape plots in the same vineyard with east and west facing slopes.

The resulting wines will be bottled separately and will be available for purchase in spring 2022 through the WSU Wine Store.

“They call the slope the pregnant lady, because the vines grow up and over a big hill,” said Madelyn Calderon, a 2020 graduate of the V&E program.

Calderon and fellow students Zachary Green and Justin Archibald placed soil temperature probes on both sides of a hill of cabernet sauvignon grapes at a vineyard in Kiona, Washington, and collected data over the summer as temperatures fluctuated from July through September of 2019.

The students theorized that west-facing grapes would ripen faster by facing the afternoon sun because of the more intense heat. But because the east-facing grapes received sun in both the morning and afternoon, the eastern soil was hotter, and the vines produced smaller grape clusters.

The dark purple grapes were collected on the same day and treated with the same fermentation process.

“Different soil, location and sun exposure can all influence the distinctive taste of a final wine,” said Thomas Henick-Kling, director of the Viticulture and Enology program.

After analyzing the grape compositions at the Ste. Michelle Wine Estates WSU Wine Science Center, they found the eastern grapes held more heat at night, ripened faster and had a higher sugar content with less acid.

Both Green and Calderon are now cellar hands at Bookwalter Winery in Richland, Washington, and said WSU’s program served as a springboard into the Washington wine industry.

Classes like Blended Learning allow students to create a wine from harvest to bottle with creative control throughout the process.

“Not a lot of people can say that they have their name on a bottle right out of school,” Calderon said.