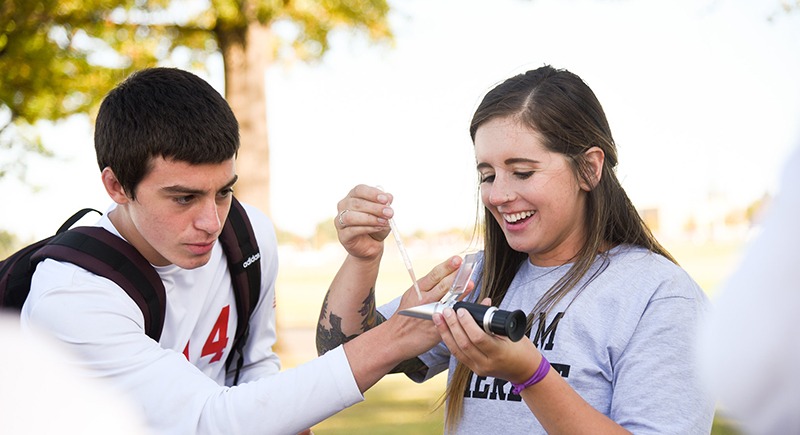 Bernadette Gagnier (’20) knows a thing or two about being an outlier. 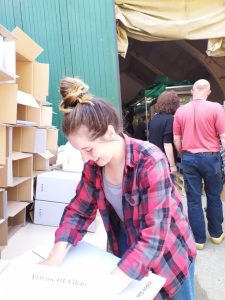 Those principles—and a personal goal “to break stereotypes”—are what led her to join the Marines right out of high school, serving in Okinawa, Japan, South Korea, and in a western Pacific deployment where she visited 13 countries in eight months.The first-generation college student is the middle child and only daughter in a family of Boy Scouts. Growing up, she was taught two principles that have guided her along a road of success: hard work and a love for the outdoors, both of which she has been able to foster at WSU Tri-Cities in the Viticulture and Enology Program.

Upon finishing her service, she found herself at a crossroads, unsure of what path to follow.

“Originally, I was going to do nursing,” she said. “I started on that track, but I didn’t really like it.”

Then, on a lark, Gagnier toured Washington’s wine country in the summer after her discharge.

“Two weeks later, I made my decision to enroll at WSU, and move to the Tri-Cities in 2017,” she said. “It happened that fast, because I just knew it was right.”

Ultimately, it was the vineyard life that guided her decision.

“I love to be outside, working with my hands,” she said.

Even though Gagnier had grown up near Woodinville—home to Chateau Ste. Michelle and a thriving wine scene—she knew very little about wine or the industry. And when she told friends back home about her career path, they were surprised. Until she told them she’d be working outside in a vineyard.

Gagnier’s first foray into the Washington wine industry was a job in the tasting room of Kiona Vineyards in Benton City, Wash., where she worked for owner and vineyard manager, Scott Williams (’80).

Driven by her desire to break stereotypes, Gagnier continues to be inspired by the leading women, particularly the vineyard managers, she meets in the industry.

On an unseasonably hot July morning at the WSU Irrigated Agricultural Research and Extension Center (IAREC) in Prosser, Wash., Gagnier processes soil samples in a large filtration machine named “Gertrude.” Working alongside a post-doctoral researcher, Gagnier is helping on a nematode (roundworm) pest-management project, and though she has only been interning at IAREC for a month, she works with the confidence of a practiced technician.

Her internship at the WSU research center stems from her plan to pursue master’s degree in horticulture.

“I told professor Michelle Moyer what I wanted to do, and she encouraged me to work on the nematode project,” Gagnier said.

Not only will the research help her transition into graduate coursework, it will provide Gagnier with the chance to present her research at the spring Washington Winegrowers convention in Kennewick.

Some might see the transition from Marines to roundworm research as a leap, but Gagnier doesn’t view it that way: “I love to learn.” 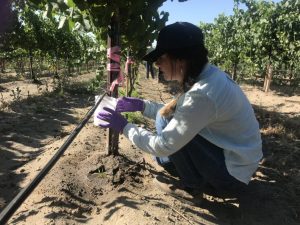 Gagnier in the field conducting research.

The internship also comes on the heels of a recent trip she took to the Netherlands, where she spent a month working for Frysling Vineyards in the northern part of that country.

Back home, when Gagnier isn’t doing homework or interning at the IAREC, she tends to her philanthropy project for veteran students. As a representative of WSU Tri-Cities Patriot’s Club, Gagnier collaborated with Bombing Range Brewing of Richland to craft the “GIPA,” an honorary beer for veterans.

The brew was a success, eventuating a charitable tradition that gives back to the students who have served their country. Last year, the group even presented former Secretary of Defense James Mattis—a Tri-Cities native—with a growler of GIPA and a t-shirt.

“It was amazing,” Gagnier said. “It was such an honor to present that to General Mattis.” The collaboration has resulted in well over $1,000 for veteran students.

In her free time, Gagnier gets outdoors to camp, ski, bike, kayak, or just hike a mountain trail. A meandering path has suited her well so far, and she’s ready for any challenge awaiting her.

“More than anything, I feel lucky to be here. I love being part of something bigger than myself.”