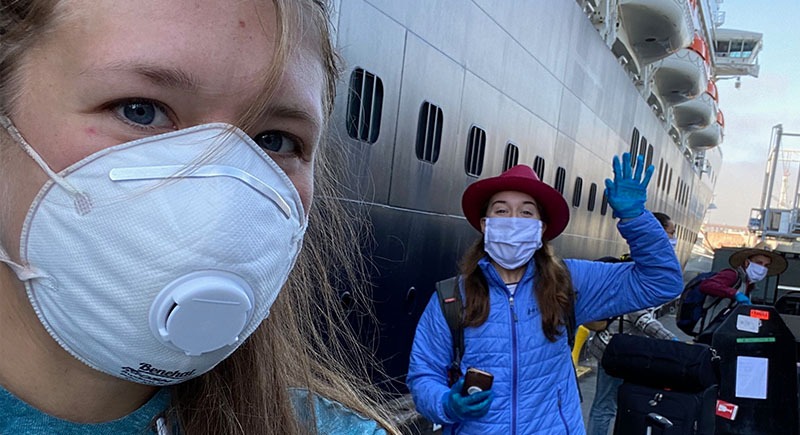 May 19, 2020 WSU Tri-Cities business alum finds herself stranded at sea amid COVID-19

It’s the length of time that Washington State University Tri-Cities business alumna Mariah Brush was stranded at sea with thousands of others while working aboard a cruise ship amid the COVID-19 pandemic. 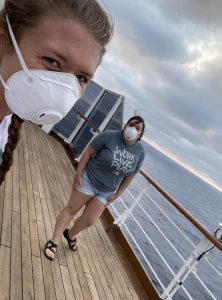 Mariah Brush and a co-worker on a cruise ship amid COVID-19.

Following graduating from WSU Tri-Cities in 2018, Brush fancied herself a regular business job working at a desk. After all, it was the type of job she was most familiar with while working several jobs in college. While studying at WSU Tri-Cities, she served as an intern in finance and contracts at the Pacific Northwest National Laboratory. She also worked for WSU Tri-Cities in various departments, at Pacific Crest Planning, NewEdge Marketing, State Farm and for a chiropractor’s office.

“I didn’t expect for my life to take such a random turn,” she said. “And I never thought I’d work on a cruise ship, let alone get stranded at sea amid a global pandemic.”

Brush heard about the job working for a cruise ship from a friend, who had done so for a few seasons. She decided to inquire about how it all worked. Before she knew it, she was four contracts in working in the kids club for the Holland America Line.

“As a student at WSU, I did a lot of event planning and marketing for events, so I was still able to apply a lot of those skills with the job on the ship,” she said. “It was really great. I went to Europe last year, the Caribbean, and then this year, did some Mexico runs and went to the Panama Canal.”

In March of this year, however, she and her crew members found themselves in an unusual predicament. At first, they thought most people had the common flu. They were asked to socially distance, but still had a relative range of freedom. They were able to go above deck and tan, watch movies on the main stage and access regular food resources. They even had a crew party. But that soon ended.

Following what would be their last visit to land of the trip, Brush said one of her good friends and fellow employees was one of the first members on the ship to test positive for COVID-19.

“I got a call from medical stating that we needed to lock ourselves in our room right away,” she said. “I freaked out, and yelled down the hall that we all had to go into lockdown. I didn’t know it was going to be for so long.” 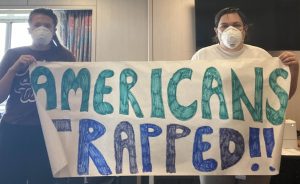 Brush said she and her fellow crew members spent the days trying to entertain themselves. She said luckily, she had bought a Nintendo Switch, which helped pass the time. She and her crewmates would call each other from their room phones. They were also fortunate to have moved to rooms with balconies, which was a huge mood booster.

The food, however, was not so great. What started off as normal meals quickly became fish heads and rice, literally. Morale also started to dwindle.

“It felt like a prison,” she said. “I had my phone, but the internet was terrible and expensive. We mostly didn’t see another human until our next meal was delivered. They would give us our food and walk away. Medical would also come by every day to take our temperatures. But for the most part, we saw no one.”

On day 14 of their quarantine, they were finally allowed out of their rooms. They could leave their room for one hour every meal time. They had 30 minutes to get to the lido deck and then another 30 minutes to walk around and get back to their rooms.

A few days after that, they transferred ships, but they still weren’t allowed to dock on U.S. soil. They went back down south to Mexico where they transferred some crew members, but they were running out of food and water. They then went back on lock-down, as a sick crew member was reported. The one shining moment was the fact that they were moved to an upper floor where they could get some fresh air.

“Every morning, we got 50 minutes of outdoor time,” she said.

It would be another few weeks before they had a glimmer of hope. They were told they could get off the ship in Los Angeles, but then were told by the Centers for Disease Control and Prevention (CDC) that it wouldn’t be possible, even after their company bought them all plane tickets home.

Meanwhile, Brush said family members back home were making frequent calls to the governor’s office, the CDC, senators and U.S. representatives. But seemingly, there wasn’t anything anyone could do. They just had to wait it out.

Then, the phone call came. They were told on May 7 that they could get off the ship and that they would be returning home. They received their plane tickets at 8:30 p.m. that evening.

Now, back home in Tri-Cities, Brush said it still feels surreal. She said she continues to have nightmares that she is back on the ship, or she wakes up in the morning thinking that she is still aboard the ship. But she does have a newfound appreciation for home and for basic freedoms.

“I’m outside right now, as I say this,” she said. “I can walk through the grass, see my family.”

Surprisingly, Brush said she doesn’t count out working on a cruise ship again, however, it isn’t in her immediate plans. She said she is currently taking some free courses online on social media marketing. She also hopes to put to use her business administration degree from WSU Tri-Cities to get a job in travel tourism or in some form of marketing after the pandemic is over.

One thing she does realize, however, is that the travel industry is likely changed forever.

“Things are likely going to be very different from here on out,” she said. “It’s going to be interesting to see how things change, and probably for the better.”