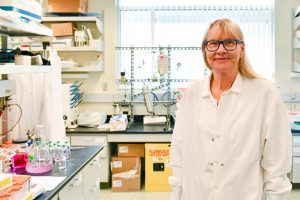 Birgitte Ahring, professor in the Gene and Linda Voiland School of Chemical Engineering and Bioengineering at WSU’s Bioproducts, Sciences and Engineering Laboratory (BSEL) in Tri‑Cities, Washington

RICHLAND, Wash. – A Washington State University Tri-Cities professor is developing a bioremediation method in hopes of bio-degrading toxic chemicals in the groundwater at a former National Aeronautics and Space Administration (NASA) rocket engine test site in California. The method has the potential of being used at contaminated sites around the world.

Up until the 1980s, a substance called trichloroethene, which is known as “TCE” and is a chlorine-based compound that is toxic for human consumption and now a known carcinogen, was used as an industrial solvent in the United States to degrease equipment and engines.

The Santa Susana Field Laboratory (SSFL) in Ventura County, California, was a major test area for liquid-fueled rocket engines associated with the Apollo and Space Shuttle Programs, with testing predominantly conducted between the 1950’s and the 1970’s. Engine testing operations involved flushing engines with TCE, which resulted in groundwater contamination. TCE is a persistent contaminant in the subsurface and still remains at SSFL today, decades after rocket testing operations have ceased.

Birgitte Ahring, professor in the Gene and Linda Voiland School of Chemical Engineering and Bioengineering at WSU’s Bioproducts, Sciences and Engineering Laboratory (BSEL) in Tri-Cities, Washington, will work with NASA to develop an optimized consortia of microbes that will naturally break down the chlorinated chemical into non-toxic products, such as ethane.

“To achieve this goal, we are working on building microcosms that will continuously be fed with water from the SSFL site, along with low concentrations of basic non-toxic carbon sources, which will enhance the overall microbial activity in the microcosms,” she said.

Ahring was approached by NASA due to her extensive background in working with microbes found under anaerobic, or oxygen-free, conditions as found in the contaminated groundwater environments.

She said the location of the TCE chemical at SSFL makes it difficult to identify methods for clean-up as it resides in fractured sandstone at depths up to several hundred feet. TCE, and its degradation products, migrate through numerous fractures in the sandstone and are also stored in the rock matrix.

She will foster and develop microbes that operate optimally under anaerobic conditions and which can be easily distributed in groundwater while degrading contaminants.

This study will be done at BSEL at WSU Tri-Cities. After development of a desired consortium, the culture may be grown to a sufficient volume that will enable it to be used for groundwater cleanup at NASA.

Ahring visited Santa Susana Field Laboratory this summer to assess site conditions and to observe the sampling of the groundwater. Both site-specific rock core samples and groundwater samples have been shipped to WSU Tri-Cities for use in the coming study.

“We are now in the process of developing the microcosms that will simulate the conditions at the site in California right here in BSEL at WSU Tri-Cities,” she said. “After establishment, we will test what can be done to speed up the dechlorination process.”

Research could be applied to cleanup sites around the world

The microbial consortia Ahring is developing have the potential to be implemented for similar clean-up jobs around the world, because TCE was a commonly used industrial solvent for many decades. The microbes will therefore potentially have many applications for bioremediation purposes.

“There are many other contamination sites that have the same problem,” Ahring said. “TCE is a major contaminant. Everywhere you have had aviation production or industrial maintenance of engines and machines, it was widely used. Our study has great potential to find useful solutions, which could have world-wide application.”