Students use success in recent hackathon as motivation for future in application design, coding 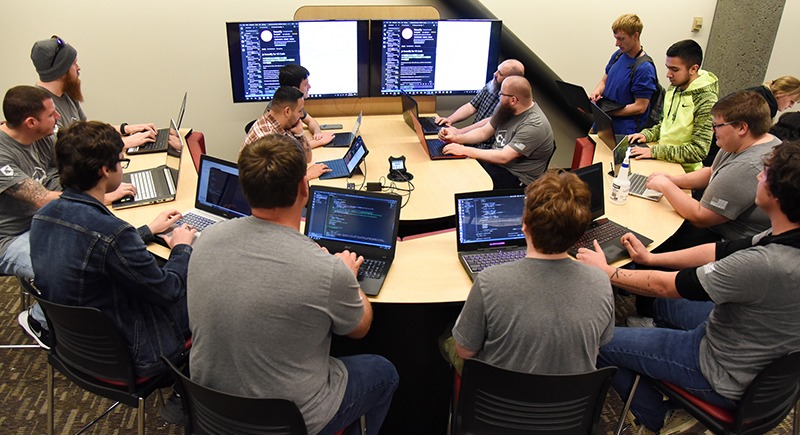 November 27, 2018 Students use success in recent hackathon as motivation for future in application design, coding

RICHLAND, Wash. – The Coding Cougs Club from Washington State University Tri-Cities had 27 hours to create three applications in teams that would address accessibility through technology during a recent coding competition in Seattle. 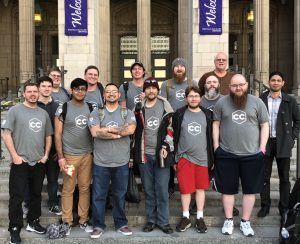 Little did they know that one of their teams would beat out dozens of others, earning them second place for their category in a competition that featured more than 600 competitors.

But while their success in the competition was a huge validation of their knowledge in coding, the goal of the competition wasn’t so much the status and prestige that came with doing well. The goal, many of the participants said, was the opportunity to apply their academic knowledge and computational thinking to produce a real-world result.

“One of the biggest things with this type of competition is that you use tools and environments that are not specifically from school,” said Manny Bonnilla, a WSU Tri-Cities senior computer science student from the DubReader team. “This forces you to use all of the skills you’ve culminated and really learn for yourself the skills that you’ll need to do well. It’s a great way to promote coding and how broad it is and it’s a lot of fun.”

Proving themselves as underdogs

WSU Tri-Cities’ Coding Club sent 12 students to compete in the DUBHACKS competition at the University of Washington in October, which welcomed participants 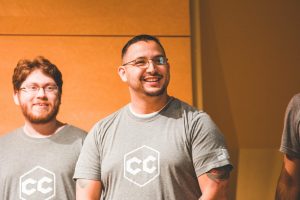 Manny Bonilla (center) and his teammates go up to the stage to accept their second place award for their “DubReader” application at the DUBHACKS competition in Seattle.

from around the Pacific Northwest.

The WSU Tri-Cities students’ DubReader application took second place in its category. All three projects, however, received praise from representatives from companies ranging from Google, to Uber and Lyft, to Microsoft.

“We spent a lot of time in my group talking with the representative from Google, who told us we did well,” said Cole Woodford, a senior computer science student from the DubReader team. “Another guy from Uber told us that we have a job if we wanted to. The networking opportunities are huge.”

And not only did they receive positive feedback from the companies, they also got to work with professionals from those companies during the competition.

“We had mentors from the industry – people from Google, Microsoft, Amazon, Athena – who worked with us throughout the process and asked us questions to see if we needed help,” Bonilla said.

And in turn, their work proved to be ideal as examples when applying for jobs. Bonilla said one of the main benefits of participating in coding competitions is that it offers students the opportunity to complete projects that they can use as resume boosters outside of what they have completed in school.

“One of the things I noticed in hunting for jobs is they look for what projects we have done outside of school,” he said. “This is huge for that. Not only did you do it with a team, but we invented something outside of the box.”

All of the WSU Tri-Cities competitors said the competition provided a great test to their skills in resiliency in modes where they were required to problem-solve. 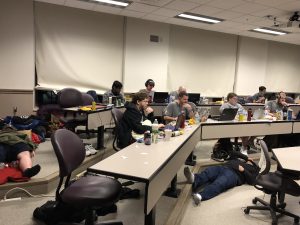 Computer science senior Josh Wassing said with their Evaluating Local Candidates application, they ended up throwing out their whole user interface after working on it for 12 hours during the competition, but that it served them well to do so in the end.

“You go down a path and find a dead end, so you change something and go with something else,” Thompson said. “You get frustrated, but it makes you think more critically in how to fix your problems. It’s all a part of the process.”

The team said they were grateful to have such positive support from their computer science professors at WSU Tri-Cities: Bob Lewis and Luis de la Torre.

“They donated their own time and money to drive us out to the event and paid out of pocket for their hotel costs,” Bonilla said. “And after we found out the results, they were there to pat us on the back and told us that we did a great job. They were really proud.”

Motivation for the future

The team will next compete at the Crimson Code hackathon competition at WSU Pullman in February. In light of their recent success, many of the team members said they are excited to put their skills to the test again. 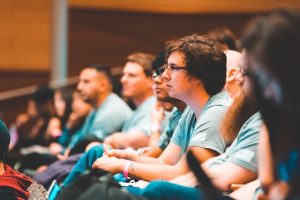 The WSU Tri-Cities Coding Cougs team awaits the results of the DUBHACKS competition in Seattle.

“Speaking for those of us who didn’t place in the top team, it gives us a target, seeing that one of our teams was able to get it done,” Thompson said. “Now, it’s our turn. We know it’s possible, so we’re going to give it our all.”

And for many students, these competitions provide verification that they have chosen the right career path.

“I’ve been programming apps for a while, but this experience is showing that it is something I want to do,” said Ezequiel Torres, a junior computer science major from the Evaluating Local Candidates team.

“When I finally got to sit down and code, I have a lot of fun because I’m building something – something that matters,” Bonilla said. “This is why I went to school.”

The students who competed in the recent DubHacks competition from the WSU Tri-Cities Coding Cougs Club included: