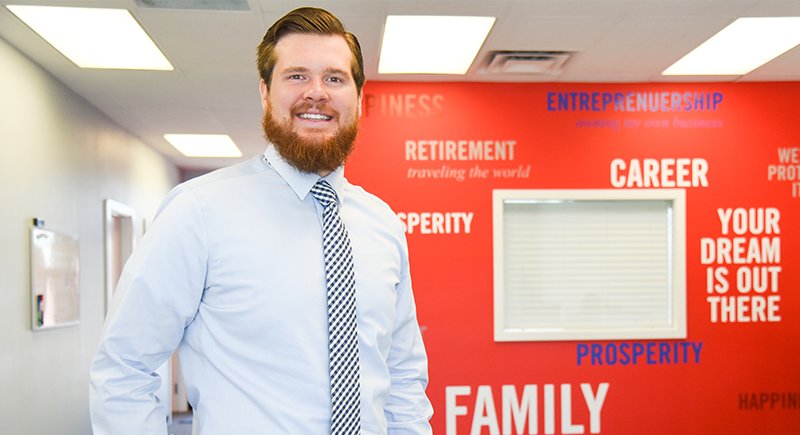 RICHLAND, Wash. – Sam Barnes may have another semester before graduating from Washington State University Tri-Cities, but he already achieved his dream of starting his own business.

While he completed his college education, Barnes worked first as a marketer beginning in Nov. 2013 and then as an office manager for American Family Insurance. 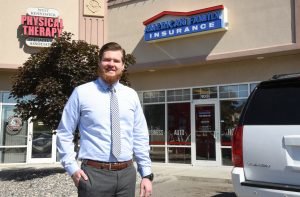 Barnes uses what he learned in many of his business, finance and other related courses at WSU Tri-Cities, as well as the networking connections he made through the university, to excel with his own branch office for American Family Insurance in Kennewick, Wash.

“I think I always wanted to be a business owner,” he said. “I knew I wanted to be in management in some form. As I went through college, I realized that this was what I was meant to be doing. WSU Tri-Cities really helped me get there.”

“When I started, I had no intentions to have an agency, but as things worked out, it has turned into the perfect opportunity,” he said. “I love it and I’m really happy with how everything worked out.”

Barnes worked at an internship at another organization he secured through connections at WSU Tri-Cities this spring when he received the call asking if he would be interested in owning and operating his own branch office. He decided to make the leap and opened his office in one of the company’s fastest turnaround times on record– all while he completed his course final exams this month.

Barnes said if it wasn’t for some of the skills and theories he learned at WSU Tri-Cities, he doesn’t think he could have been as successful as he has been in the past month since opening the office.

“I used the concepts we learned about in a finance class to build out cash flows for my business, I’m using what I learned from my accounting class in meeting with my accountant and I’ve readily used what I’ve learned about business law and business ethics for the management of my business and the hiring process,” he said. “It’s been great to take what I learned from WSU and apply it to the real world.”

Barnes said his favorite part about his business education at WSU Tri-Cities was that it was intertwined with world-class organizations and industry standards.

“WSU Tri-Cities is really good at helping students get a job and getting them connected to real-world opportunities,” he said. “Everything about this campus is about plugging you in somewhere. They helped me get an internship before I came here to American Family. It’s a crucial part of the college experience, in my opinion, and something that they do better than most universities.”

Now, Barnes said he is excited to see where his business takes him in his next stages in life. He graduates this fall with his bachelor’s from WSU Tri-Cities.

“I think anyone can successfully open their own business if they are willing to put their mind to it and are willing to take the leap,” he said. “I think I’ve found what I want to do forever, which is be a business owner. The freedom you have and the pride in what you do is incredible. It’s the most rewarding experience.”