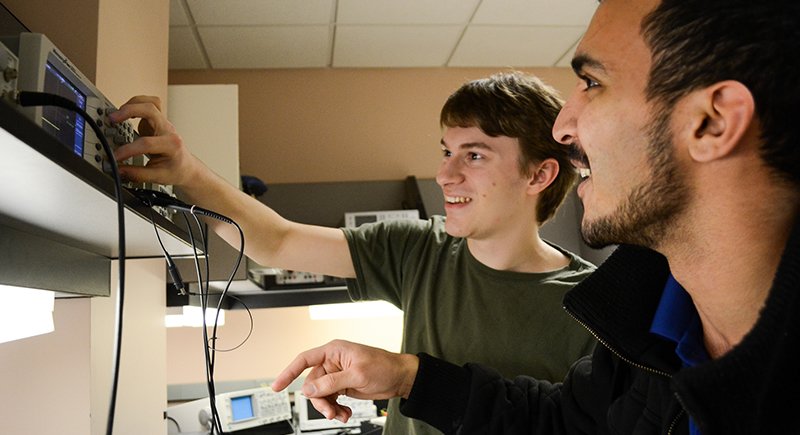 Before LIGO announced that it had made its second-ever observance of gravitational waves last year, further proving Albert Einstein’s theory of relativity, Daniel Cain was one of the few who already knew.

Cain, an engineering student at Washington State University Tri-Cities, took on an internship experience at LIGO Hanford last summer where he worked with engineers in 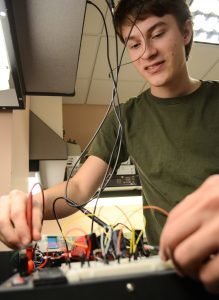 radio frequency technology. He spent the summer building devices that would help filter and decipher radio waves, which would help prevent interferences and disruptions with equipment that had a larger role in the gravitational wave detection technology.

LIGO made their second gravitation wave detection on Dec. 26, 2015, but it wasn’t until July 15, 2016, that they made the detection public. A large part of the gap in time, Cain said, is that scientists must sort through a multitude of data to ensure that their detections are accurate and that they hadn’t picked up a false positive from another source.

While Cain’s internship experience didn’t deal specifically with the gravitational wave detection technology, it still had an impact on safeguarding the equipment that will continue to be crucial in the whole effort.

“While the radio waves don’t interfere with gravity waves themselves, they interfere with other electrical equipment, such as the laser controls,” he said. “My job was to help them make sure that radio interference doesn’t affect their detections.”

Cain will present his project at WSU’s Academic Showcase from 9 a.m. – noon March 27 in the Compton Union Building at WSU Pullman.

Cain said in order for scientists and engineers to detect gravitational waves at the facility, they use a number of very sensitive, very sophisticated instruments that detail intricate waves that, until 2015, had never been physically observed. Cain said the lasers used to detect the waves, which require a vacuum-sealed environment, also necessitate a range of equipment that prevent and decipher between even the slightest of environmental factors, which could lead to a false positive.

“The moon passing around the earth causes the earth’s crust to flex,” Cain said. “It changes the shape enough that they have to worry about it being a disruption to their monitoring equipment. The scientists and engineers at LIGO have to monitor a lot of environmental factors, from wind, to seismic activity, to even spring runoff from the mountains.”

Similar disruptions could occur with other vital equipment at the facility.

Cain said what they wanted him to create was a circuit that would take the output of their radio receivers and tell LIGO engineers how strong radio waves were in a way that could be turned into a digital number that they could easily read and categorize. Knowing the radio signal strength would help them eliminate false positives.

Cain said the difficult part of his initial study and creation of radio monitoring equipment is that radio waves are so fast that normal circuits can’t rate them accurately.

Additionally, he said, most radio wave-reading equipment use the logarithmic decibel scale, which is effective for increasing equipment range, but not so convenient in understanding what the wave is doing, exactly. 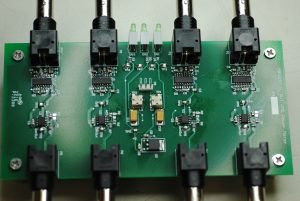 Part of a radio wave device that WSU Tri-Cities student Daniel Cain made for LIGO during his internship last summer.

“Almost all radio equipment is logarithmic, which is why they wanted my design to work because it wasn’t logarithmic,” he said. “It wasn’t absolutely necessary, but would have made their data processing a little easier.”

Cain created two prototypes, the first of which had a few design issues, which he corrected using new and modified materials. His second prototype worked, but its main issue was that it couldn’t pick up weaker radio signals.

“It became very accurate,” he said. “The output had to be between zero and two volts, and it was in the 90th percentile for accuracy. It could detect the higher-strength signals very well. But the tiny signals, which are weak and easily blocked, it didn’t detect very well.”

Cain ran out of time for his third prototype. He was successful, however, in modifying one of their established device designs to do what was asked of him, but it remained in logarithmic scale, which was still an issue. But his efforts were not all lost. One of Cain’s major feats came by accident in the final stages of creating one of his devices.

“I figured out that one of the antennas for their radio receivers was broken,” he said. “It isn’t something they are always watching, but it is something they have to check. They told me they probably wouldn’t have found out it was broken until they were about to look for gravitational waves for real, which would have forced them to reassign an engineer to fix the problem. They told me it was almost worth the whole summer finding that.”

Applying school to the real world

Cain said even though he ran into some issues during his internship and wished he would have more time to develop the technology, the learning process, alone, made the whole summer a worthwhile experience.

“I learned so much,” he said. “I put to use a lot of things that I learned in school and I had to learn a lot of things from scratch. The practical experience, alone, I would recommend to anyone in an engineering program.” 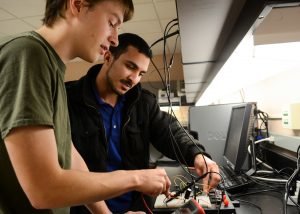 Daniel Cain, left, and a classmate work on a device during an engineering lab course.

Cain said the body of knowledge in engineering has grown to be so large that it is becoming not possible to teach a student everything they need to know during an undergraduate education.

“It is not really possible to bring an undergraduate to the level of knowledge of the industry, which is where things like internships come to play,” he said. “Having the experience this summer means that some of the mystique surrounding engineering is removed. That is one of the main reasons why internships and practical experience is so important. It gets you out of the school mindset and into the real-world mindset.”

Cain said it was also incredibly rewarding to work with world-renowned engineers that have truly made a mark in history, but at the same time, are as down to earth as the next person. They were always willing to “help out the ultra noob,” he said with a laugh.

“The engineers were all really nice,” he said. “They all took pity on me as the new guy, helped answer my questions and offer their advice. They were all quick to help explain things that you wouldn’t normally learn in school, but that everyone else knows in the industry. That was the most valuable part.”