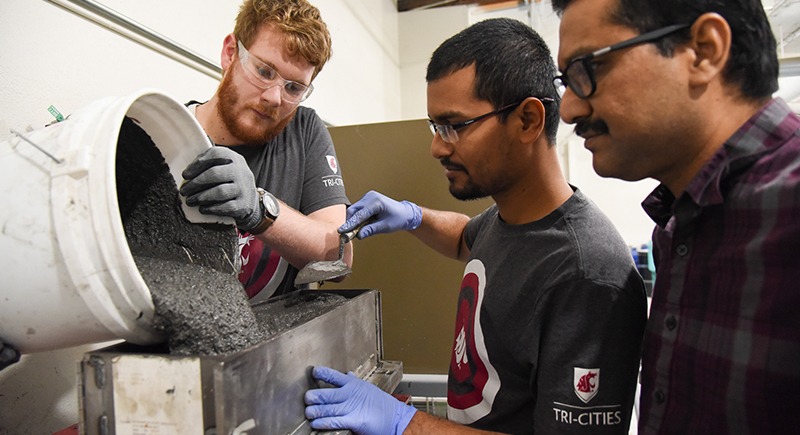 RICHLAND, Wash. – After seeing initial success in developing an ultra high-performance grout to potentially encapsulate solid secondary waste at the Hanford Site, Washington River Protection Solutions (WRPS) is providing a Washington State University Tri-Cities professor and his research team with more than $300,000 to further the research. 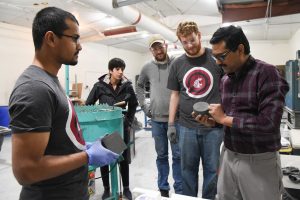 WSU Tri-Cities civil engineering professor Srinivas Allena (right) talks with engineering students about the structural components of blocks made from an ultra-high performance grout they are developing that could potentially be used to solidify secondary waste at the Hanford Site.

The WSU Tri-Cities team, led by civil engineering professor Srinivas Allena, is developing what is known as an ultra high-performance cementitious composite grout. The team’s final formulation will use industrial byproducts such as coal ash and steel slag that have the potential to reduce costs compared to commercially available and prepackaged high-performance grouts, while reducing the impact on the environment. The solid secondary waste it would encapsulate could include items such as used or broken equipment, contaminated tools and equipment that require stabilization and encapsulation prior to disposal.

WRPS is the U.S. Department of Energy’s Tank Operations contractor responsible for managing Hanford’s 56 million gallons of highly radioactive waste and preparing it for delivery to the Waste Treatment and Immobilization Plant. The organization provided the WSU team last year with more than $140,000 to develop a grout to encapsulate solid secondary wastes from tank farms and future Waste Treatment Plant operations, and the team came up with several formulations. Now, the WSU team is further optimizing those formulations to produce a cost-effective and sustainable grout formulation.

The end formulation has to be able to handle large physical stresses while proving resistant to rapid freezing and thawing cycles, low porosity and long-term durability. 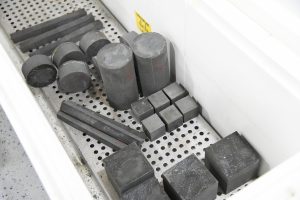 Blocks and other shapes made from an ultra high-performance grout being developed by WSU Tri-Cities civil engineering researchers.

For one of their formulations, Allena and his team showed success in replacing a typical ingredient in commercially available encapsulation grouts, known as silica fume – a byproduct from the silicon industry – with a substance known as fly ash, which is a remnant product from burning coal in thermal power plants. The fly ash, often a waste product, would serve as a cheaper and locally sourceable option, in addition to reducing the amount of coal-based ash that is sent to landfills or returned to coal mines for disposal.

For another formulation, the team plans to replace fine sand typically used in encapsulation grouts with locally-sourced, larger-particle sand, which would not require a sieving process. The removal of the sieving process saves on cost and previous results have shown that the large sand-containing formulation holds the needed strength and low porosity required for an encapsulation grout.

The technique, though promising, is in the proof-of-concept phase. Any future use at Hanford would still need to meet disposal criteria for any given waste stream and undergo regulatory approval and any applicable permitting processes.

“We’re repurposing waste products and also reducing the cost while ensuring and enhancing the durability properties required for an encapsulation grout,” Allena said. “Our initial testing has shown good results.” 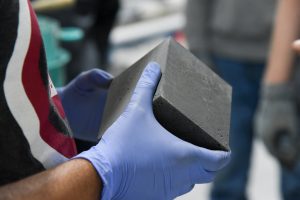 A block made from an ultra-high performance grout being developed by WSU Tri-Cities civil engineering researchers.

“Cement industries cause approximately 7 to 11 percent of greenhouse gas emissions worldwide,” Allena said. “Cement is made from the burning of limestone and leads to the release of a lot of carbon dioxide. Reducing the demand on cement by using slag will therefore reduce cement production and the associated greenhouse gas emissions.”

Allena said if they are successful with their end formulation, their grout has the potential to be used in a variety of applications, such as bridge construction, and has large commercial potential.