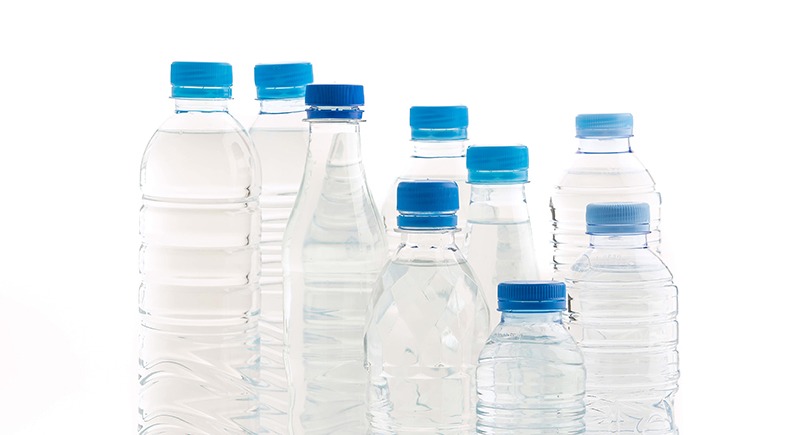 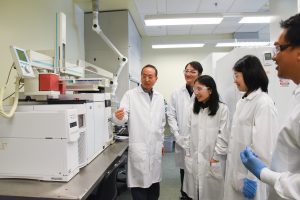 Hanwu Lei, associate professor in WSU’s Department of Biological System Engineering, and his research team examine a sample in the Bioproducts, Sciences and Engineering Laboratory.

“Waste plastic is a huge problem worldwide,” said Lei, an associate professor in WSU’s Department of Biological System Engineering. “This is a very good, and relatively simple, way to recycle these plastics.”

In the experiment, Lei and colleagues tested low-density polyethylene and mixed a variety of waste plastic products, like water bottles, milk bottles, and plastic bags, and ground them down to around three millimeters, or about the size of a grain of rice.

The plastic granules were then placed on top of activated carbon in a tube reactor at a high temperature, ranging from 430 degree Celsius to 571 degrees Celsius. That’s 806 to 1,060 degrees Fahrenheit. The carbon is a catalyst, or a substance that speeds up a chemical reaction without being consumed by the reaction.

“Plastic is hard to break down,” Lei said. “You have to add a catalyst to help break the chemical bonds. There is a lot of hydrogen in plastics, which is a key component in fuel.”

Once the carbon catalyst has done its work, it can be separated out and re-used on the next batch of waste plastic conversion. The catalyst can also be regenerated after losing its activity.

After testing several different catalysts at different temperatures, the best result they had produced a mixture of 85 percent jet fuel and 15 percent diesel fuel.

According to the Environmental Protection Agency, landfills in the U.S. received 26 million tons of plastic in 2015, the most recent year statistics are available. China has recently stopped accepting plastic recycling from the U.S. and Canada. Conservative estimates by scientists say that at least 4.8 million tons of plastic enters the ocean each year worldwide.

Not only would this new process reduce that waste, very little of what is produced is wasted.

“We can recover almost 100 percent of the energy from the plastic we tested,” Lei said. “The fuel is very good quality, and the byproduct gasses produced are high quality and useful as well.”

He also said the method for this process is easily scalable. It could work at a large facility or even on farms, where farmers could turn plastic waste into diesel.

“You have to separate the resulting product to get jet fuel,” Lei said. “If you don’t separate it, then it’s all diesel fuel.”

Washington State University Tri-Cities is the home of the Bioproducts, Sciences and Engineering Laboratory, a state-of-the-art research facility operated in partnership with the Pacific Northwest National Laboratory. The facility establishes the Tri-Cities as a center for world-class bio-based product research and development.