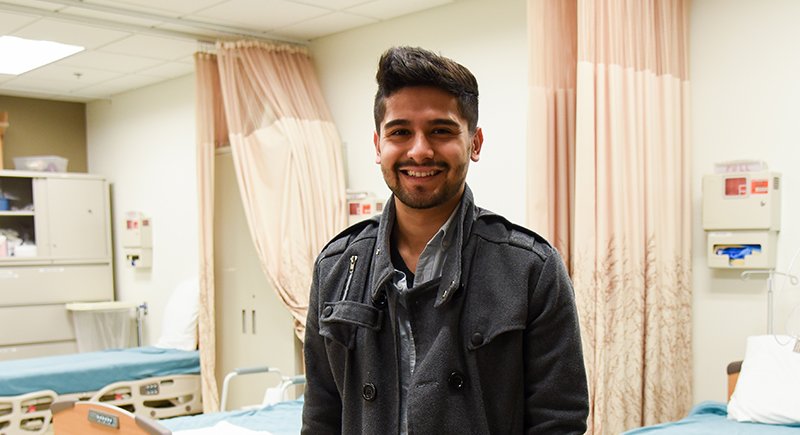 Jamie Silva hadn’t considered a career in the medical profession until he saw directly how he could use research and patient interaction to better medical care for all citizens, regardless of demographic.

The recent nursing graduate of Washington State University Tri-Cities said it was through the research experiences he observed through both as a community college student, as well as in his undergraduate experience through WSU Tri-Cities, that opened his eyes to the possibilities of medicine.

As a community college student in Wenatchee, Silva participated in a research experience where he completed research on algae that they used to replicate the behavior of cancer cells and observe treatment effectiveness. The effort tied directly in with what friends and family had experienced in their battles with cancer. It propelled Silva’s interest in the medical field.

“I’ve seen family and friends pressured into certain types of treatments and this made me realize that I could have an impact on how patients are consulted about treatment,” he said. “My aunt, for example, was pressured into chemotherapy right away. Since she didn’t really understand English, so she assumed that was the best route for her. I want patients to be able to better understand their options.”

Silva began focusing on how he could take his newfound passion for medical research and patient care to the next level and applied to WSU Tri-Cities’ competitive nursing program. The school, he said, provided a perfect blend of medical research and implementation of innovative patient medical care that he had sought for a future in the profession.

This year, he was named the undergraduate nursing student of the year for WSU Tri-Cities.

“I feel that the nursing program is really impactful,” he said. “I didn’t want to be in a lab all day. I wanted that patient interaction. I wanted to see how the research applies directly to and affects the patient. WSU Tri-Cities ended up being a perfect fit for that.”

Through his hands-on courses at WSU Tri-Cities, Silva learned about how cancer and other diseases impacted the human body, how to treat those ailments, about different medicines, as well as how to approach patients about possible treatment options.

Silva said his courses utilized innovative tools such as advanced medical mannequins that mimicked individuals with various ailments and allowed students to practice their medical procedures. Additionally, he learned from world-class nursing faculty that tied what the students were learning in the classroom to extracurricular opportunities outside the classroom.

“Some of my biggest highlights were actually the professors,” he said. “They really care about us and really want to make sure that we succeed, and in turn, that our patients succeed.”

Silva’s professors at WSU Tri-Cities helped pair him up with a practicum experience at the Kadlec Regional Medical Center where his work focused specifically in research and administration. Through the experience, Silva attended meetings with physicians, nurse navigators and dietitians where they discussed cases, what worked best for individual patient cases, as well as what needed some changes. They then applied those strategies directly to their patient care.

Through the practicum, Silva also completed a research project that detailed how the hospital could reduce the time that patients suffer from neutropenia — a condition where the patient has an abnormally low count of a type of white blood cell, causing their immune system to be weak and creating a higher risk of infection. Neutropenia occurs in about half of people who receive chemotherapy. It is also a common side effect for people with leukemia.

“We compiled data on the time from when the patient walked in, to when they received antibiotics, the type of antibiotics they used and when those particular antibiotics were administered,” he said. “I compiled all of that data and showed it to the chief of nursing. It was a pretty informative experience and I hope it helps to make a difference in the lives of future patients.”

During his time at WSU Tri-Cities, Silva also gained admittance into a highly competitive summer internship through the National Institute of Health in Washington, D.C. Through the experience, Silva studied the latest and greatest methods for combatting cancer using the patient’s immune system.

“I would get to the laboratory and would have a research experiment in mind and I would write a protocol and conduct that experiment,” he said. “Some of those experiments involved observing how certain treatments would impact rats with cancer. I would also examine all the organs within the rat and see how effective the treatment was.”

Silva said he didn’t really realize it at the time, but he got the opportunity to work with some of the nation’s leading scientists and medical researchers.

“It was a pretty extraordinary experience,” he said.

Silva said he hopes to take the experience he has had through WSU Tri-Cities, his experience at Kadlec, as well as his experience through the National Institute of Health to further improve the standard for patient care, as well as create and improve upon current and future cancer treatments.

“My friends and family who have had cancer have been the driving force with where I want to go and the influence I hope to have in the medical field,” he said. “It’s why I went into nursing.”

His end goal, he said, is to one-day become a physician focusing on cancer immunology. Because of his experience at WSU Tri-Cities, the WSU medical school is on his list of potential medical schools he hopes to gain acceptance to into the future.

“The nursing program at WSU Tri-Cities was more than impactful,” he said. “I learned how I could advocate for people with these diseases, the research behind those diseases, as well as how to combat those diseases through research into different treatment options.”

“I want to take a little bit of time working as a nurse and then apply what I’ve learned through my undergraduate courses, my experience as a nurse, as well as what I am going to learn through medical school in my future as a physician,” he said.