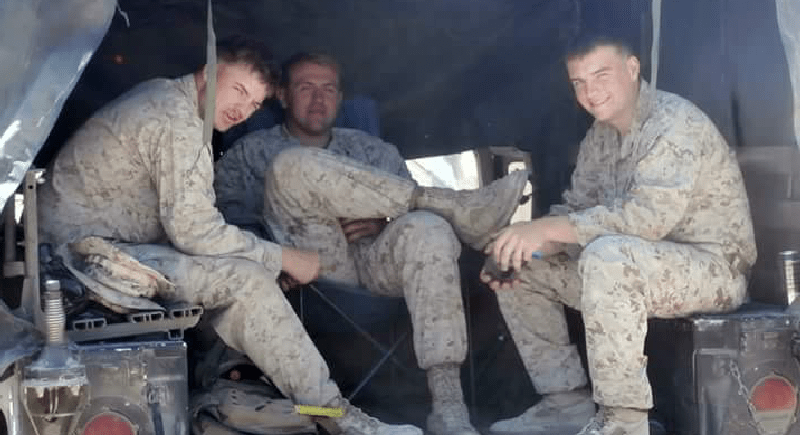 RICHLAND, Wash. – Washington State University Tri-Cities student Benjamin Bush wanted the hardest career challenge he could find after graduating from high school at the age of 18. 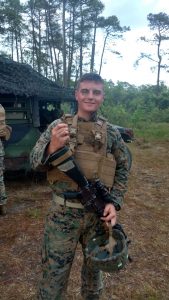 Growing up in Walla Walla, he wanted to get out and see the world, but also find something that would push him to his limits. The U.S. Marine Corps offered just that.

“I wanted to do something that was hard and not standard,” he said. “I like a challenge.”

In the Marines, Bush served in fire direction control for artillery, among several other responsibilities, throughout his time in the service. He deployed with the 22 Marines expeditionary unit to Israel, Spain, Bahrain and Oman. His unit also supported operations in Libya while the U.S. Armed Forces were combatting ISIS.

Toward the end of his service, Bush had worked his way up to the rank of sergeant, where he was in charge of his battalion’s body composition program. But he was ready to chart a new path, he said, because he missed his family.

“Overall, it was a cool experience, but artillery was always in the field or gearing up for deployment,” he said. “It is fun while you’re in, but after a few years of it, you miss sleeping somewhere warm and dry. I missed the soft, comfy bed and a roof over my head. But most of all, it was hard being away from my family. I was married for most of the time and being away from my wife two weeks per month was tough.” 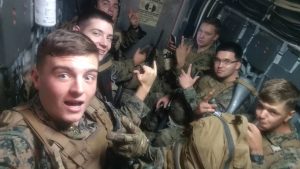 Benjamin Bush and members of his U.S. Marine Corps unit.

A university education, Bush hoped, would help him find his next step post military.

In making his decision of where to attend college, Bush wanted to stay local.

He began his college career at Walla Walla Community College, where he served in the schools’ veterans center. He helped foster relationships with fellow veterans and connect them with resources. In 2018, he transferred to WSU Tri-Cities to earn a degree in business.

Bush said he chose business as his degree as it provided a great amount of versatility and suited his career trajectory goals. He hopes to one-day work his way up into the position of CEO of a company that gives back.

The military, he said, was great training for whatever lies ahead. And with his education, he can build his skills in the finance world, while continuing to refine his leadership aptitude, he said.

“I would love to work for a company that betters the ocean or a nonprofit that makes big impacts on our environment,” he said. “If there is a place where I can use my skills to improve the environment and our world, that would be my dream.” 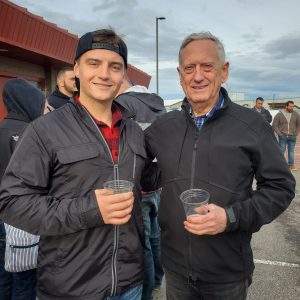 While going to school full-time and in addition to serving as the finance manager for the Associated Students of WSU Tri-Cities, the campus’ student government, Bush also serves as the veteran navigator with the WSU Tri-Cities Veterans Center. Through that position, he helps connect veteran students with resources and opportunities through the Veterans Affairs office, all while offering up his support as a friend and confidant.

“It’s where I feel a lot of fulfillment in my life,” he said.

Coinciding with his position as veteran navigator, Bush also serves as president of the WSU Tri-Cities Patriots’ Club. The veterans-focused club organizes events and activities for veteran students. The club has hosted fishing trips, camping trips and more that have encouraged veteran students to bond.

“A lot of veterans tend to be pretty tight, emotionally, and hold everything down,” he said. “I found that, especially for myself, the best thing to do is talk about it. Get it off your chest and talk to someone who has been there. That is very valuable.”

Supporting one another – even in times of COVID-19

Amid the COVID-19 pandemic, Bush said many veteran students have struggled with being siloed and connecting digitally, as well as supporting themselves financially. As such, he and his fellow Veterans Center and Patriots’ Club members have worked to create opportunities to help engage students and provide additional resources that have allowed veteran students to stay in school.

“My favorite experience here at WSU Tri-Cities has been working with the Veterans Center,” Bush said. “It has continued to grow and become a better place for veterans to gather and get the support that we so desperately need. It is a place to hold these types of support opportunities and come together as brothers and sisters. I am super grateful to our community and I’m happy to be a part of it.”