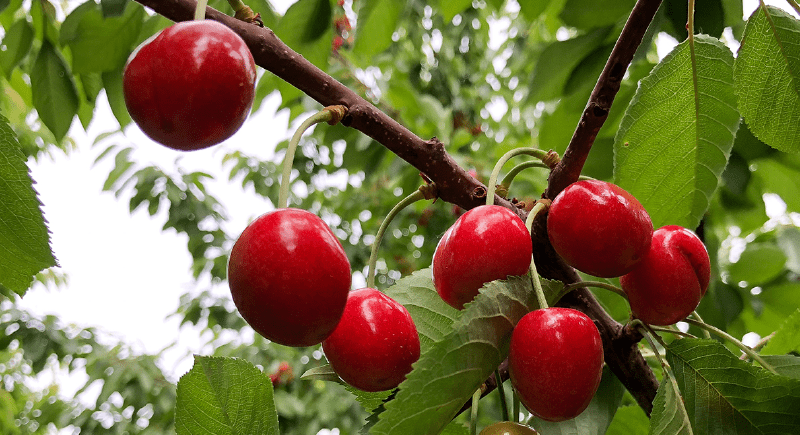 RICHLAND, Wash. – A new agricultural innovation from Washington State University may solve an ancient predicament: how to protect crop plants from cold damage at bud break. As spring brings warmer weather, plants wake up from dormancy and begin the processes of growth and flowering. But one cold night can kill those buds before they have a chance to flower and fruit.

What’s needed are tiny baby blankets that shield those emerging buds from frost. And it’s precisely an insulating coating that researchers at Washington State University have developed and are in the process of commercializing.

WSU’s Xiao Zhang, Matt Whiting and their colleagues Qin Zhang and Changki Mo are utilizing cellulose nanocrystals, CNCs, to protect grape, cherry and other flowering crop plants during frost events. Cellulose, the most common polymer on the planet, is a remarkable substance with myriad useful properties. Zhang and colleagues write in a recent paper that CNCs are stronger than steel in a strength-to-weight face off, capable of being drawn into thin film-like layers and, best of all, are super insulative. In a recent field study, the researchers concluded that a single CNC application “improves cold-hardiness of sweet cherry and grape buds by about 2–4 °C compared to non-treated buds.”

That thin protective layer is just enough to keep baby buds snug until the cold snap gives way to the warmer spring weather which triggered the new growth in the first place.

Whiting, a horticultural physiologist, was visiting with Zhang, a chemical engineer, about something unrelated, when Zhang showed him the thermal-property data on CNCs. Whiting says he mentioned that the substance might be used to reduce frost damage and Zhang replied, “Oh, is that a problem?” In fact, it is a huge problem all over the world.

Citrus in Florida, almonds and other crops in California, coffee in Brazil, apples and pears in Portugal and Washington State–all are susceptible to frost damage, one of agriculture’s biggest killers. While the direct loss of a crop due to cold damage can be in the billions of dollars, the knock-on effects are even worse: loss of a crop means the loss of jobs for pickers, packers, processors, and retailers. A report from the UN’s Food and Agriculture Organization says that “in the USA, there are more economic losses to frost damage than to any other weather-related phenomenon.”

While there has been some innovation in terms of breeding plants for greater cold resistance, the physiological reality of a tender bud is hard to change. Other protective measures, like fabric covers, wind machines, circulating water, or heaters fueled with propane or diesel, have not changed in years. According to the agriculture-focused European Innovation Partnership, “The frost protection methods that are currently used by fruit producers are essentially the same that were used in the last decades of the 20th century.”

Whiting agrees, saying, “I’ve been working on cold tolerance for nearly 20 years, and there hasn’t been any innovation in decades.”

With a horticultural industry eager for new and effective forms of frost protection, Zhang and Whiting have formed Pomona Technologies. Pomona was the Roman goddess of fruitful abundance, and her name derives from the Latin for “fruit.” Today, pomology, a related word, is the science of growing fruits.

After a four-year series of small-scale tests that proved that CNCs did indeed offer good frost protection, the team is proceeding with both large-scale tests and moving toward commercialization. Whiting thinks that Pomona Technologies will see its first product fully available in 2022.

CNCs are widely used in medical, industrial and other applications, including cosmetics, and are already approved for various uses by the Environmental Protection Agency.

With global climate change bringing earlier spring weather in many parts of the world, some might think that frost damage will go the way of the dodo. But earlier springs mean earlier bud break, which actually increases chances of frost damage as cold snaps will still occur. That means farmers need protection they can apply quickly and inexpensively, which CNCs appear to promise.

As Whiting says, “Every flower you can keep alive is money in the bank.”

Support for the development of this technology includes funding from USDA National Institute of Food and Agriculture, the Washington State Tree Research Commission, the WSU Office of Research, and the Washington Research Foundation.