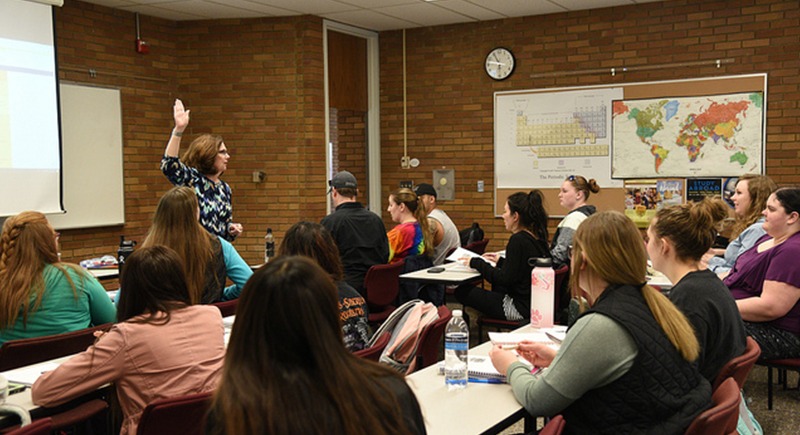 RICHLAND, Wash. – As part of a class at Washington State University Tri-Cities, adjunct education professor Cathie Tate picked up two simple objects: a popsicle stick and a paper clip. She asked the future teachers sitting before her how they would describe the objects to a young child. 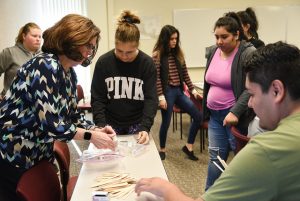 With students describing traits such as color and material, she then asked her students: “Ok, how would you compare the two objects?”

It was a start of a lesson in showing the students how to describe mathematical concepts in a simple manner. It was also one of many lessons for the students in how to make teaching math less daunting and more fun. It is what many students describe as a talent of Tate’s.

Tate was recently recognized for her teaching accomplishments after being honored with a Crystal Apple Award by the regional Educational Service District. The award recognizes public school educators who have made a positive impact on the lives of their students. 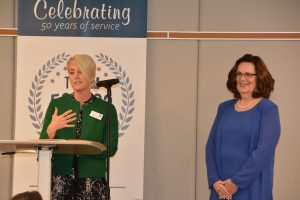 Deisy Cardoso, a former student of Tate’s at Delta High School and now a current student majoring in education at WSU Tri-Cities, said Tate is the person who inspired her to major in education with an endorsement in middle level mathematics.

“I was thrilled when presented with the opportunity to take her course here at WSU Tri-Cities,” she said. “In that class, she provided me with the tools to confidently teach math to future students and encourage them to take responsibility for their learning.”

Nominator Judy Morrison, academic director of WSU Tri-Cities’ College of Education, said Tate has a passion for making math an approachable subject, even encouraging a love for the subject in students – including those who were hesitant of teaching math at first.

“Many elementary teacher candidates are anxious about approaching mathematics as not only an adult learner, but as a future teacher who will be entrusted with helping pupils to understand and enjoy mathematics,” Morrison said. “Cathie uniformly takes these students from a state of anxiety about teaching math to one of excitement for the future.”

A yearning to teach

Tate has taught at WSU Tri-Cities since spring 2009. She teaches math for elementary teacher courses through the WSU Tri-Cities College of Education. In addition to 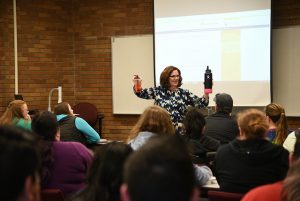 serving as an adjunct professor at WSU Tri-Cities, she teaches full-time at Delta High School, educating students in the subjects of calculus and multi-variable calculus. She also presently serves as an adjunct college in the high school professor for Central Washington University and used to teach courses at Columbia Basin College.

At the K-12 level, and especially with the Pasco School District, Tate said she has worn many hats: middle and high school teacher, department chair, instructional coach and math facilitator. She was also on the planning committee for Delta High School in 2008. But what she loves most is the interaction with her students, whether that be students at the K-12 level or the college level.

“I can’t imagine not getting up each morning and going to teach,” she said. “Students, high school or college, inspire me to be a better version of myself. I want to bring my ‘A’ game to every class because that is what my students deserve. I joke with my students that the day I stop caring about bringing my ‘A’ game to class is the day I retire.”

Tate said she was inspired to go into a career teaching mathematics by an instructor she had at Columbia Basin College in the 1970s.

“She was the first female math instructor I had ever had,” she said. “In 1974 and 1975, mathematics was an unusual profession for females. She became a role model to me and encouraged me to become a math teacher.”

Tate said she was told many times that, as a female, she couldn’t do math.

“I chose to become a math teacher to change this perspective,” she said. “Along the way, I realized that our schools were filled with math anxious students and it was my job, as a high school math teacher, to eliminate that stress.”

Changing the perception of math

Tate said at the high school level, she was able to impact about 100 students in a year, but she felt that she could give even more. She said she was thrilled when she was offered the opportunity to teach mathematics for elementary school teachers at WSU Tri-Cities so that she could try to make even more of a difference.

“How do I change an adult student’s perspective of mathematics?” she said. “I do this by asking them the first day of class to trust me. I explain that we will be looking at math through a different lens and that I am there to help them be successful. I inform them that they will be given more than one opportunity to succeed at a learning target. I also ask the students who have found previous math courses easy to open their minds to view math through the eyes of a struggling student.”

Tate said seeing the light in a student’s eyes when they first understand and embrace a concept is still the most rewarding part about teaching.

“It is indescribable and it still has the power to rejuvenate me as a teacher,” she said. 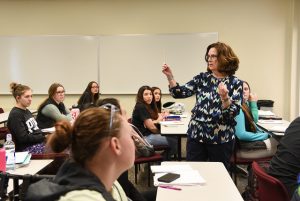 At WSU Tri-Cities, Tate said she enjoys being able to interact with a new generation of teachers and hopefully inspires in them a passion for math.

“In my role at WSU Tri-Cities, I am able to show adult learners that math is fun,” she said. “If future teachers can have fun in math class, this will impact the students they will someday teach.”

“She has a way of teaching you with respect, which becomes mutual and deserved,” she said. “Learning how to teach math was a fun, entertaining and educational experience because Cathie knows what she is talking about and how to create an environment of learning that takes the fears away about mathematics.”

“She can effectively speak to her students about the academic topics while still reaching a level of mutual respect and friendship, but still maintaining a professional manner,” Arthur’s son Stuart said.