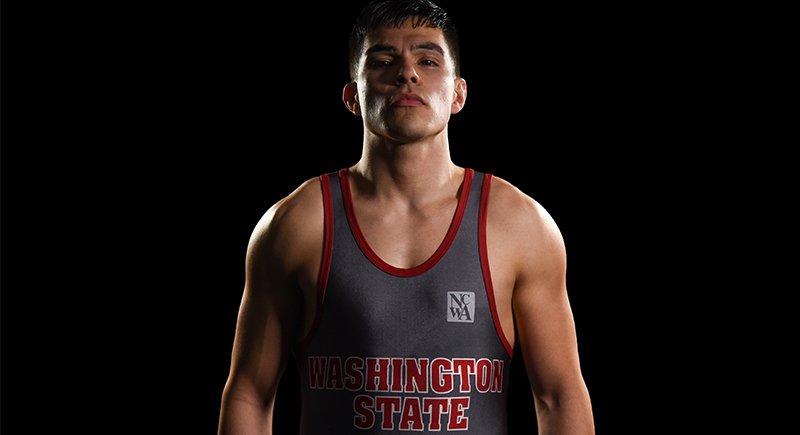 Mendoza competes in the 141-pound classification with a team based out of WSU Pullman. The WSU team took second overall at the regional tournament and will send eight other wrestlers who also qualified for the national championships:

During Mendoza’s first match at the regional tournament, he pinned Grays Harbor College’s Brent Goodwater in the quarterfinals to advance. In the semifinals, he edged out Western Washington University’s Keagan Mulholland 5-3 in a close overtime match. Mendoza then lost to Montana Tech’s Timothy Ellinger 13-9, who took home first place in the finals.

Mendoza’s other workouts are centered at his local employment at The Den fitness facility at WSU Tri-Cities, which provides him the facilities to workout on a daily basis, as well as his duties as a volunteer coach at Pasco High School. The opportunity allows him to work out with the high school students and wrestle with the younger coaches. Mendoza also runs five miles a day at his local gym in Pasco.

Mendoza said he has never let the fact that he doesn’t have a home team in the Tri-Cities prevent him from accomplishing his goals with wrestling.

“Overcoming adversity in the sense of lacking a college wrestling in my home area is a process, but this is a great opportunity to turn some heads and surprise the teams in our conference,” he said.

Succeeding in athletics and academics

“I’ve always been competitive as an athlete, and that has continued to spill over into my school work and other parts of my life,” he said. “My goal is to one-day encourage and motivate other Tri-Cities students to follow their dreams and set a high goal to eventually achieve. Implementing a phenomenal work ethic, whether it’s athletics or academia, will make any crazy goal realistic.”

Mendoza said he has high hopes for the upcoming tournament, especially with it being his second year competing at the national level.

“I am grateful to have the opportunity to represent my university and my Tri-Cities community on the national stage,” he said.