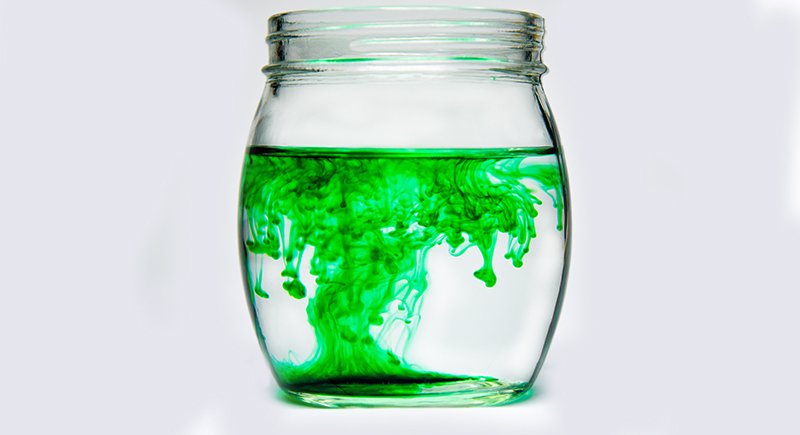 Stemming from his background growing up in Ethiopia, Yonas Demissie views water as a commodity more valuable than oil.

In the nation of more than 94 million people, just 42 percent have access to clean water in Ethiopia. That is why the WSU Tri-Cities assistant professor of civil and environmental engineering has directed his research efforts toward the monitoring, exploration and evaluation of the resource that is vital in sustaining life. 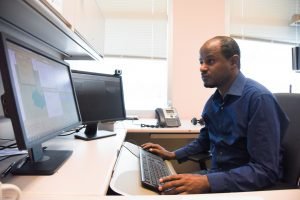 “Here in the U.S., we take water for granted,” Demissie said. “Our daily water use here is as much as 10 times than that of a person in other countries where water is in limited supply.”

Demissie said he has personally never experienced not having access to clean water, because he grew up in Ethiopia’s capital city of Addis Ababa where infrastructure is more advanced than other parts of the nation. But that doesn’t mean the issue doesn’t hit close to home.

“I may have grown up in the city, but the water scarcity issue and famine in the country are regular news,” he said. “It always bothered me to see images of starving children. There is no excuse for a child to get hungry. As a society, we should all be responsible for that. I want my research in water to be my contribution to society. Water is a very critical resource that needs to be accessible, protected and properly managed.”

Demissie is currently working on a myriad of research projects at WSU Tri-Cities that focus on various aspects of water-related issues.

“In terms of overall impact, any study on understanding and properly managing water resources is key,” he said.

Demissie is currently half-way through a four-year project studying the impact of climate change on military infrastructure, focusing specifically on whether defense infrastructure and facilities could handle increased flooding and abnormal increases and fluctuations in precipitation. His research is funded as part of a $1 million contract with the U.S. Department of Defense. 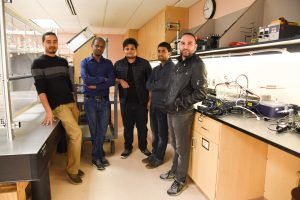 “DOD has many facilities across the globe and many of those installations are close to coastal areas,” he said. “They are worried about sea level rise, increased extreme storms and how that will affect their facilities and operations. Our research is to assess flooding risk with the DOD facilities’ existing storm water management system and whether it is sufficient or needs to be upgraded.”

A change in precipitation caused by climate change and/or other factors, Demissie said, could also have drastic impacts in other areas such as agriculture.

“In our regions, for example, how snowfall on the Cascade Mountains is going to be affected due to climate change will be an important issue in determining future agriculture productions,” he said. “Even though the total amount of annual precipitation may not be affected, there may be a shift in when that precipitation may occur.”

Instead of most of the precipitation occurring in the winter and early spring, as it is now, Demissie said it may occur mostly in winter, or even in the fall. He said farmers may not have the water when they need it for their crops and that the timing shift could have a significant negative effect.

In a similar study funded by the state’s water center, Demissie recently completed evaluating and updating decades-old design standards used to construct water related infrastructure, such as culverts, bridges and dams, for all the counties in Washington state.

Additionally, he and his team were also recently awarded funding from the state’s water center to study drought characteristics in the Yakima basin and to evaluate effectiveness of a $4 billion water management plan currently under consideration for tackling drought in the region.

“Climate change is one of our generation’s major issues that we are going to have to deal with,” he said.

Researchers are making significant strides in the biofuels industry, creating fuels for jet airplanes, cars and more that help reduce the United States’ carbon footprint. WSU is leading the industry in research for biofuels with its Northwest Advanced Renewables Alliance (NARA). But increases in the crops in the Midwest required to make certain biofuels may be having a damaging effect on ecosystems in the Mississippi River and Gulf of Mexico. 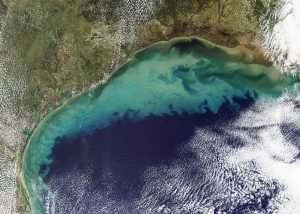 Sediment in the Gulf of Mexico – Courtesy Wikimedia Commons

Demissie is studying the impact of increased nitrates and phosphors from farming practices related to the biofuels industry in Midwest on the Mississippi River and Gulf of Mexico, and how they can minimize those issues.

“In the Midwest, they are making biofuels from corn, which requires increased nitrogen and phosphors applications, which end up in the streams,” he said. “Increased nitrate and phosphors lead to algal bloom, which eventually prevents vegetation and fish from growing in lakes and other water bodies.”

Demissie said increased algae prevents the natural process of photosynthesis from happening in the water as the sun can’t reach the lower levels and life essentially ceases from occurring. Because the Gulf of Mexico is connected to the Midwest through the Mississippi River, those nitrates and phosphors run directly into the gulf, causing algae bloom that currently covers areas as large as Connecticut and Rhode Island, combined.

“The Gulf of Mexico is one of the important regions for fishing,” he said. “We are growing more corn in the Midwest to meet demands of biofuels, but at the same time, we could end up killing an important industry downstream. We want to make sure that doesn’t happen.” 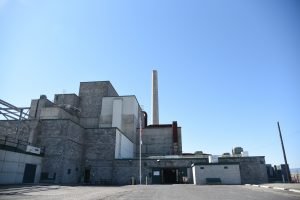 Since he started at WSU Tri-Cities in 2012, Demissie has consistently worked with Hanford Site contractors and Pacific Northwest National Laboratory staff in monitoring and modeling the groundwater flow from the site to ensure there is no radiation and other toxic contamination with vital sources such as aquifers and reservoirs used for human daily water use.

Contamination from the Hanford Site stems back to the facilities’ production of plutonium from World War II and the Cold War. Chemicals were released, both planned and unplanned, into the soil around the site. Scientists have since worked to develop and improve upon models that are used to predict the flow, as well as determine which areas they should treat.

“We are consistently monitoring groundwater contamination for Hanford, using various monitoring and modeling projects to tell where it’s flowing and how fast it is traveling,” he said.

“We’re always working to improve methods and models for doing so,” he said. “We’ve made significant strides in reducing the contamination from those early years.”

Demissie is presently working with a team of people to examine current flow patterns and allocations of the Nile River, and how they can more effectively be shared by all African countries associated with the river.

The Nile River is the world’s longest river, flowing 6,700 kilometers through 10 countries in eastern Africa, where water is mostly scarce. Demissie said any water project in the upstream tributaries of the Nile has been under political contention, as countries like Egypt and Sudan use the river as their main source of water and electric power generation.

Ethiopia, where 80-90 percent of the Nile water originates, historically was not using the river despite being hit by regular famines caused by highly variable rainfall in the region. However, Ethiopia is now constructing the largest dam in Africa on the Blue Nile, the main tributary of the Nile River, for electric power generation. Political officials in Egypt are worried that it would limit their access to the river, which they said they have a natural right to two-thirds of the resource, as indicated in The Nile Waters Agreement that was signed in 1959, which Ethiopia never signed.

Demissie and his colleagues Gabriel Senay, Naga Manohar Velpuri, Stefanie Bohms and Mekonne Gebremichael completed a study in 2014 that integrated satellite data and modeling to detail the variability of water sources in the Nile Basin. Their study revealed that about 85 percent of runoff generated in the equatorial region (Ethiopia, Tanzania, Kenya and Uganda) is lost along the river pathway that includes the Sudd wetlands, which has an area approximately twice the size of Maryland. This proportion is higher than the literature reported loss of 50 percent.

In addition, their study found that the expected average annual Nile flow at the Aswan Dam in Egypt is 13 cubic kilometers greater than the reported amount of 84 cubic kilometers originally reported. Demissie said that means there is a flow amount that equates to more than half of Colorado River of water each year that was not accounted for during the 1959 water agreement.

Demissie said the loss in runoff and flow volume at different sections of the Nile River, however, tend to be more than what can be explained by evaporation losses, suggesting a potential recharge to deeper aquifers that are not connected to the Nile channel systems. He said the study indicated the need for increased instrumentation detailing the hydrometeorology of the basin.

“Our knowledge regarding water availability in the Nile Basin and how much and where water is lost in the system is limited,” he said. “But our analysis shows that we get more water into the system than what was originally estimated. There is extra water that Ethiopia can use.”

Demissie said he hopes his group’s initial research will lead to bigger developments in assessing the direction, flow and amount of water from the Nile, which could lead to positive legislation among the African countries that may help lead to an agreement that would benefit all.

“Having a good understanding of water as a resource and coming up with a better management strategy I believe is critical for most societies,” he said.