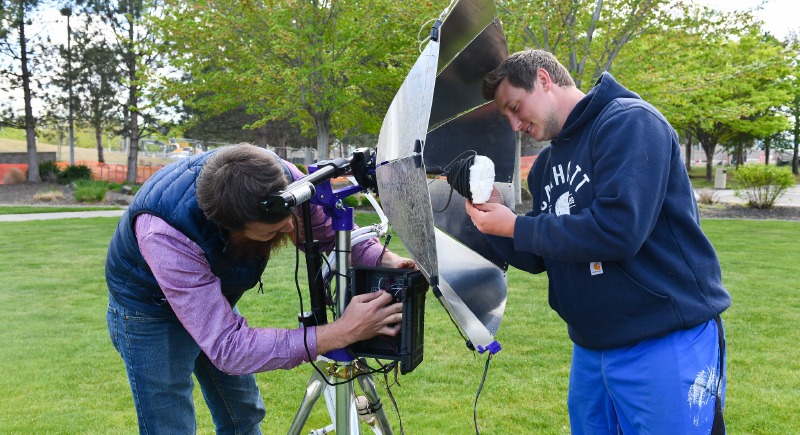 RICHLAND, Wash. – A Washington State University Tri-Cities student mechanical engineering team created a working prototype of a solar water purifier that they hope will one-day be used in developing countries where access to clean water is scarce. 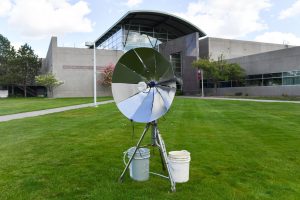 The project was led by recent engineering graduates Mitch Blocher, Daniel Lara, Alex Andres, Sergio Alvarado and Zachary Garcia under the advisement of their instructor, Steve Jordan, who also sponsored the project. The group created the project as part of their senior design capstone engineering course.

“The foundation to this project is based on a similar senior project from the past in which a group was tasked with developing a solar milk pasteurizer,” Andres said. “When our advisor came up with the idea of taking this solar milk pasteurizer and implementing it into a solar water purification system, his first thought was to make it portable and user-friendly enough to send out to third world countries without access to purified water.”

The system uses a solar reflector, positioning system, pumping system, electronics and a heat exchanger to regulate heat, pump water through the system and purify the water out of a standard bucket or other water container. The system, they said, had to be relatively simple, as the parts needed to be locally sourced and able to be fixed in developing countries.

“First, recognizing that the design of this system revolved around a well-thought-out control system, breaking down the complex processes into a simpler, high-level subsystem based on their tasks greatly helped,” Blocher said. “From there, each sub-system could be designed because we knew what function each system, sensor and part needed to perform, as well as how it interfaced with other components.”

Blocher said their final design had to meet specific portability and weight criteria, in an effort to ensure it was portable. He said when fully assembled, the system stands six-feet tall and nearly four-feet in width, but it can be broken down small enough to fit in a backpack, where it weighs 20 pounds. 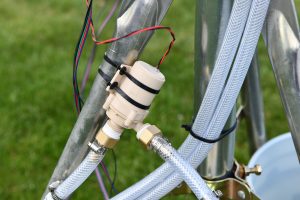 Pictured is the pump used for a solar water purifier prototype designed by a WSU Tri-Cities student engineering team.

Lara said one of the most challenging parts of the project was the COVID-19 pandemic and the limitations that it presented. He said trying to pull together their project in a remote environment, which still required physical assembly, proved difficult, but they made it work.

Andres said availability of materials and components amid the pandemic also proved challenging.

“That being said, WSU Tri-Cities gave us as much opportunity as permitted to supplies and resources” he said. “Our advisor was also very cooperative and dedicated to getting us all we needed to accomplish our design.”

Lara said it feels humbling to know that they were able to contribute a new design that is easy to manufacture and even easier to transport in an effort to provide a commodity, which is growing scarcer and scarcer each year.

“It feels gratifying to know that we were able to design a functioning prototype to show people that it is indeed possible to build a system such as this when there are few options available on the market,” he said.

“Engineering is all about innovation,” Andres said. “It has truly been a privilege to not only come up with a solution to a worldwide crisis, but to do so working side-by-side with other brilliant engineering students, advisors and faculty has been even more rewarding. It is truly a moment that I believe will stick with every one of us for the rest of our lives.”

The team hopes that future engineering teams will take the project and advance particular components so that they can one-day send it overseas for implementation in the developing world.