SPOKANE, Wash. – The Washington State University Board of Regents approved the design and construction of a 40,000-square-foot academic building for undergraduate studies in biology, chemistry and education in science, technology and math, or STEM, fields. 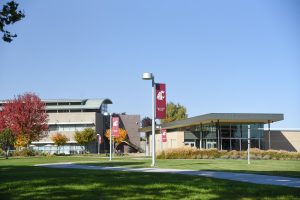 The $30.4 million facility is being funded by the state legislature. The budget bill financing the project is awaiting Governor Jay Inslee’s signature.

The building will sit west of the Consolidated Information Center and house a dozen labs for physics, biology, chemistry and anatomy/physiology. It will have two 96-seat classrooms and a central gathering area with stadium seating for large group presentations and community gatherings. Preliminary site work will begin in October and construction will be completed in spring 2021.

The Regents also approved the schematic design for the planned WSU Pullman baseball clubhouse at the current Bailey‑Brayton Field. The board approved the $10 million building’s design and construction at its January meeting, with the improvements to be paid for with private donations.  The project will include a locker room, pitching lab, academic area, team meeting rooms, and areas for Cougar equipment and training. Construction will commence in August and conclude a year later, assuming a sufficient amount of pledged donations are collected.

Other items the Regents approved included the refunding of Trust and Building Fee Revenue Bonds originally issued in 2009 and the creation of a new Center for Arts and Humanities.

Refinancing 2009 Bonds will save millions

The Board of Regents approved a resolution to authorize the issuance and sale of bonds to refinance the 2009 Trust and Building Fee Revenue Bonds, with a maximum per amount not to exceed $83,850,000.

In the current market, the refunding transaction is estimated to result in $7.3 million or 9.3% net present value savings over the remaining term of the bonds. Trust Land and Building Fee revenues are restricted for capital purposes only. Thus, the estimated annual savings of approximately $670,000 would accrue back to the trust and building fee revenue accounts.

New center reinforces WSU’s commitment to the arts and humanities

The new Center for Arts and Humanities will serve as an organizing point for creative and scholarly activity and public engagement in the arts and humanities, with the further potential to support innovative teaching at both the undergraduate and graduate levels.

The Center’s primary goals will be to expand WSU’s capacity for foundational research in the arts and humanities, nurture interdisciplinary connection and collaboration, increase the public visibility and outreach of WSU arts and humanities faculty, and to catalyze WSU’s engagement with emergent fields of humanistic and artistic knowledge.

Working in concert with academic departments, which will remain centers of more specialized, field­-specific inquiry, the Center will advance a broader agenda, one that crosses traditional scholarly boundaries, encourages innovation, and advocates for the vital contribution of the arts and humanities to the public good.