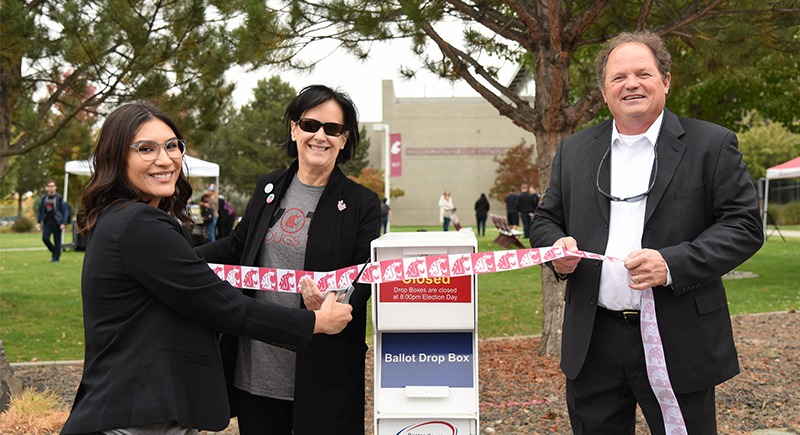 Washington State University has been named a Voter Friendly Campus for its success with voter education and registration. 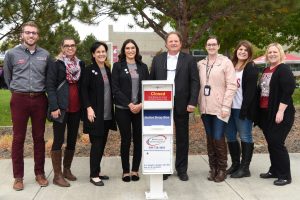 Savanna Kresse, vice president of the Associated Students of WSU Tri-Cities, and her peers in ASWSUTC worked with the Benton County Election Department to get a ballot drop box on the WSU Tri-Cities campus. The group cut the ribbon for the box this fall.

The designation was announced by the nonpartisan Campus Vote Project and NASPA, a national association for student affairs professionals in higher education.

The Voter Friendly Campus designation is a system‑wide honor for WSU, the only four‑year institution in Washington to be named for the 2019–2020 election cycle.

“Receiving this designation recognizes our efforts to shift the campus culture at all of our locations to one of more student participation in our democracy,” said Ben Calabretta, associate director of the Center for Civic Engagement (CCE). “We are setting a new standard where we expect our students to know about the election issues, to register to vote, and then actually vote.”

The mission of the Voter Friendly Campus designation is to bolster efforts that help students overcome barriers to participating in the political process. Barriers can include voter ID laws, lack of information, transportation to the polls, and confusing residency requirements.

“I think it’s important to remove barriers that students face because those barriers are silencing the future,” said Savanna Navarro Kresse, vice president of the Associated Students of Washington State University Tri‑Cities. “Many people assume students do not care to be a part of the political process, but the reality is we care a lot. When voting is accessible, students show up to vote.”

Kresse is a member of the WSU Cougs Vote Coalition which consists of faculty, staff, students and community members who are interested in increasing student democratic engagement.

The coalition met throughout the summer and fall of 2018 and created strategies to establish a student-driven awareness and democratic engagement campaign, educate students about the importance of midterm elections in addressing local and statewide issues, increase voting rates of WSU students above the 2014 midterm levels, and improve voting rates among multicultural and other underrepresented students. 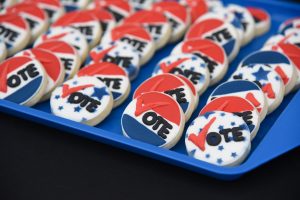 “Vote” cookies at the grand opening of a ballot drop box at WSU Tri-Cities this fall.

Calabretta said the coalition’s efforts were very successful. Although CCE is still waiting to receive official numbers from the Secretary of State, he estimates over 3,000 students registered to vote through Cougs Vote related activities. Local precinct data indicate a higher voter turnout, too, with an increase of 2,000 voters in the Pullman precincts where WSU’s main campus is located.

With the midterm election over, there is a lull in the election cycle before things begin to heat up for the 2020 race. In the weeks ahead, Calabretta said it will be important for the coalition to continue its efforts, and being named a Voter Friendly Campus is a good motivator to keep the momentum going.

“We want to keep voting in our students’ minds so they know it’s still important and it’s something that they will participate in for the rest of their lives.”