Uzbekistan to Costa Rica to a career in the medical field: Student aims to help less fortunate 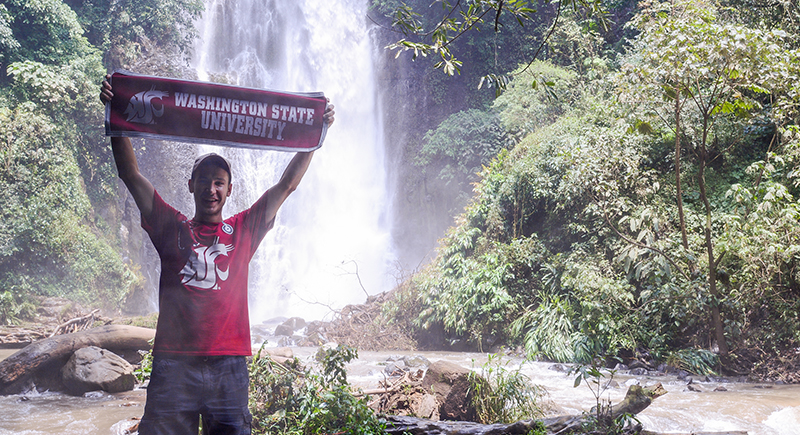 May 15, 2018 Uzbekistan to Costa Rica to a career in the medical field: Student aims to help less fortunate

RICHLAND, Wash. –  Nikita Fisenko was 10 years old when he came to the United States with his family from Uzbekistan.

“At the age of 7, in a family of seven kids, my father passed away of cancer,” he said. “It was really hard. My father was our only support.” 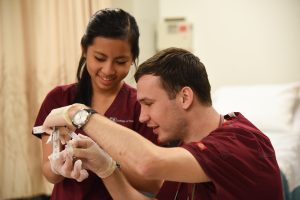 Nursing student Nikita Fisenko (right) works with a classmate to perform a practice procedure in a nursing class at WSU Tri-Cities.

Because his grandmother lived in the United States, the family was able to apply for residency. After a several-year grueling application process and after selling everything they owned, Fisenko and his family found their new home in eastern Washington. At the time, Fisenko had four English phrases to his memory.

“Yes, no, thank you and hot tea,” he said. “It was cold when we came and asked for Chai and learned that in English, it was hot tea.”

Fisenko spent several years playing catch-up with his English and studying hard to learn school subjects in a language not his own, but one thing always served as an encouragement: one-day he would use his own experiences in overcoming hardships to help others. Little did he know that his ideal career would be in the medical field and that Washington State University Tri-Cities would help take him places that would allow him to help those less fortunate.

“I’m using my education and experiences at WSU Tri-Cities to help others through my future career as a nurse,” he said. “It’s exciting to know that I can have that personal impact.”

Fisenko studied diligently in Spanish because he thought that one-day he could use the language in a career as a Christian missionary, which had always been a passion of his. He used his experience in high school working in the fruit fields and factories to chat in Spanish with his fellow employees that, in combination with his Spanish courses, allowed him to become nearly fluent in the language.

He also excelled in mathematics – it was the one subject that didn’t require a mastery of the English language. 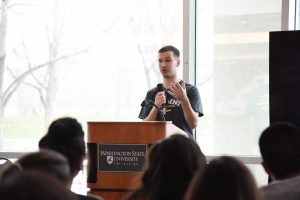 Nursing student Nikita Fisenko gives a presentation about his study abroad experience in Costa Rica to a group at WSU Tri-Cities.

As his schooling rolled on, however, Fisenko developed an interest in the medical field, which led him to enroll in the Tri-Tech Skills Center’s pre-nursing program. He wanted to see if the medical route would be right for him. It turned out to be a perfect fit, as it would still allow him to use his fluency in Spanish to help others.

“I’m a people person, and nursing allows you to work with people to help them overcome their medical ailments and really have an impact,” he said. “With my background in Spanish, I could also use that to reduce barriers for others who originally like me, don’t speak English.”

He chose WSU Tri-Cities to prepare him for his future career as a nurse because it would allow him to live at home and help his family with expenses, but also receive a first-class education.

“WSU Tri-Cities ended up being the perfect fit for where I’m at in my life, what I want to accomplish and the people I hope to help,” he said.

Around the world in the medical field

At WSU Tri-Cities, Fisenko takes his studies very seriously. The 4.0 student said he aims to learn everything he can so that he can be the best nurse he can be.

“I want to be a nurse that actually changes things – I want to make a difference,” he said. “So I can’t just memorize the material for the sake of doing well on tests. I have to really know the material because I’m going to apply it to my career as a nurse where I can have a real impact on people.” 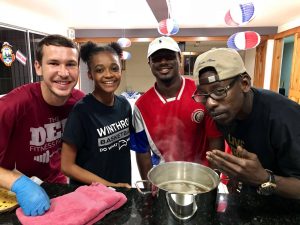 WSU Tri-Cities student Nikita Fisenko (far left) poses for a photo with classmates and housemates during his study abroad experience in Costa Rica.

Fisenko said he had always wanted to travel to a country where Spanish was the primary language so that he could further develop his skills in the language that would allow him to help others. He decided to take as many courses as he could his first couple of years at WSU so that before he certified into the nursing program, he could do a semester study abroad program in a Spanish-speaking country.

After speaking with a WSU study abroad advisor and after extensive research, he decided on a medical-based program in Costa Rica, where he would study medical Spanish and health sciences. He completed the program this fall.

During his program in Costa Rica, he made sure to interact extensively with the local population and traveled to neighboring countries. He traveled to Panama, Guatemala and Nicaragua, in addition to spending his weekends traveling the Costa Rican countryside.

The experience, he said, was life-changing.

“The biggest thing I would say in going to study abroad was that it shaped my mindset and my perspective,” he said. “Understanding other cultures and people, it can open so many more doors to your future. Through this experience, I developed my communication skills and I was able to better understand other people’s perspectives and ways of doing things.”

Future in the medical field

Fisenko is now working his way through his first year in the WSU nursing program, which he said is preparing him for the rigor of being a nurse. 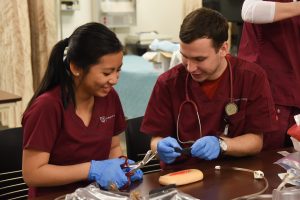 Nikita Fisenko (right) works with a classmate to perform a practice procedure in a nursing course at WSU Tri-Cities.

Fisenko said he hopes to use his experiences, ranging from his difficulties in migrating to the United States, to learning English and Spanish, to the challenging nursing program at WSU, to his experiences abroad, to one-day help individuals at Kadlec Regional Medical Center as a future nurse. Kadlec, he said, has been his dream employer for years.

“God-willing, I will be there helping, advising and speaking Spanish to help those with medical issues,” he said. “I want to really make a difference. God has blessed me and shaped me into who I am, so I want to use that to bless others.”