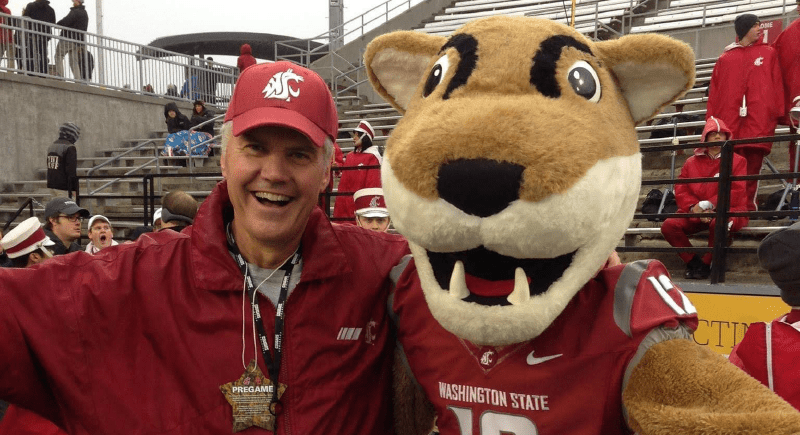 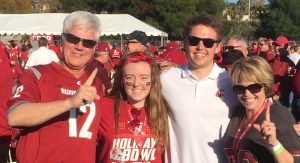 Brad Fisher and his family at a WSU football game.

Fisher passed away Sunday afternoon surrounded by family and friends comfortably in his home. Through the end, he remained a passionate Coug.

“A Coug through and through,” WSU Regent Lura Powell said about Fisher. “In every way, Brad is just an amazing guy. He is so giving, friendly, outgoing, caring – everything that really epitomizes the Cougar Nation. If I have to think of a role model, not only as a Coug, but as a community member who gave it all, it would be Brad.”

Fisher graduated from WSU Pullman with a bachelor of business administration in 1979. After graduation, he returned to the Tri-Cities, serving two terms on the Kennewick City Council and one term as mayor. He also led a successful career in wealth management, retiring as a senior vice president for RBC Wealth Management.

Through WSU, he was an active member of the WSU Foundation, as well as serving on the WSU Tri-Cities Advisory Council where he also served one term as chairman.

“I met Brad two-and-a-half years ago when I first came to the Tri-Cities,” WSU Tri-Cities Chancellor Sandra Haynes said. “He was such a wonderful person – he exuded warmth and caring and, clearly, was a die-hard Coug.”

Powell said Fisher was a true community contributor, the first to lend a hand and to help his community. Haynes echoed Powell’s comments.

“Brad was a tremendous support on the WSU Tri-Cities Advisory Council,” Haynes said. “He always brought good ideas, the wise advice and the creativity to that group. WSU Tri-Cities would not be the same without his service on that committee. He was there, rain or shine, and was fully committed to giving his all.”

“He was always one of the loudest yellers for the Cougs during sporting events,” Powell said.

“Brad’s memory will continue to live on for many years through Butch’s home at WSU Tri-Cities, spreading joy to family, friends and others throughout the WSU community,” Haynes said.

In memory of Fisher and his contributions to WSU and the Tri-Cities community, the family asks that individuals make a gift in the name of Fisher to the endowment fund. Donate to the “WSU Tri-Cities Brad Fisher Butch T. Cougar Excellence Fund.”