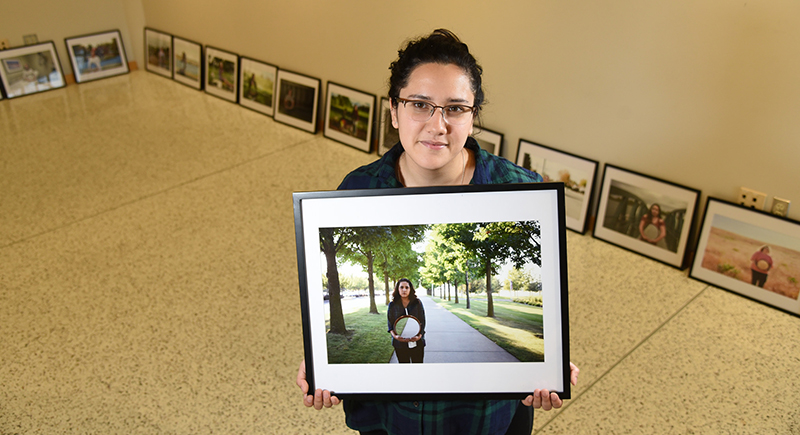 RICHLAND, Wash. – The emotionally powerful, poignant “Empty Photo Project,” created by Washington State University Tri-Cities student Susana Butterworth, that details the tragic and emotional experience of what it is like to lose a child, will be on display from Jan. 12-Feb. 8 in the WSU Tri-Cities Art Gallery.

The exhibition, which Butterworth began in a fine arts course at WSU Tri-Cities after losing her own son in utero, tells the story of 25 parents who have lost a child, and the physical and emotional impact it has had on their lives and their relationships with family, friends and even strangers. In addition to the written stories of each parent featured, each features a photo of the parent taken by Butterworth, which represents both the physical and mental hole left in the parents’ lives after the child’s passing.

An opening reception for the exhibition will be held 5 p.m. Friday, Jan. 12, in the WSU Tri-Cities Art Gallery.

Butterworth lost her son Walter in March 2017. Butterworth’s son suffered from a rare condition known as Trisomy 18 where the baby develops with an extra chromosome. The condition disrupts the normal pattern of development in significant ways and leads to death in approximately 50 percent of cases. Butterworth’s son passed away at 36 weeks in utero.

“After losing Walter, I was experiencing a lot of grief, but there was also this disconnection with people that I was feeling,” she said. “I wanted to explore this realm of capturing emotions that people go through, but I also wanted to make it relevant to what I was going through. Coming out of the hospital, I want to show that losing a baby is a big deal. Some people don’t realize that or know what to say.”

The Empty Photo Project has now been viewed by thousands after being featured by a variety of platforms, some of which include Babble (a parenting website operated by Disney), the Huffington Post and Pop Sugar. Butterworth said she plans to continue the project as long as there are people who want to contribute their stories to the project.