First-generation student a champion for equity and inclusion 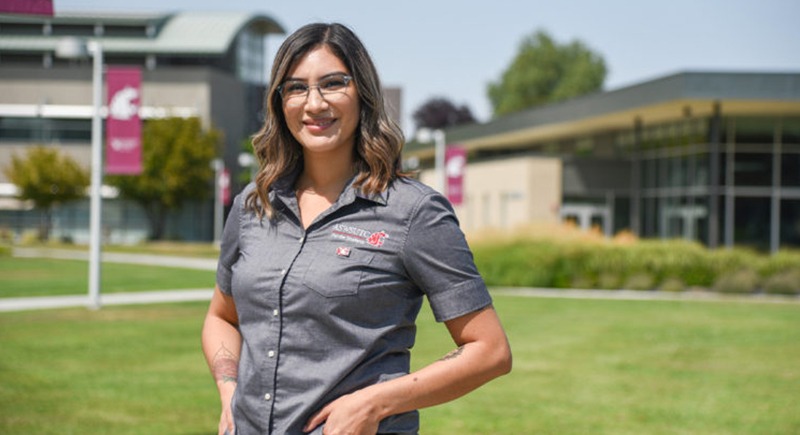 05 Sep First-generation student a champion for equity and inclusion

While Washington State University Tri-Cities student Savanna Navarro Kresse is excited for the new school year, she is particularly happy September has arrived. The new Mosaic Center for Student Inclusion has opened its doors and a grand opening is scheduled for Thursday, Sept. 12. Located in the Floyd Building, the Mosaic Center is dedicated to diverse students of all kinds allowing them to gather, learn from each other, and seek support. 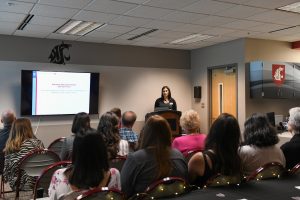 Navarro Kresse has a vested interest in this center for several reasons. A Chicana and first-generation college student who is passionate about helping the community, she played a leadership role in creating the center as vice president of the Associated Students of Washington State University Tri-Cities (ASWSUTC). She and ASWSUTC President Zachary Harper set the project in motion over a year ago and spent countless hours meeting with students, faculty, staff and administrators to make it happen.

“With over 41 percent of our student body being students of color and 44 percent first-generation, we have a very diverse campus,” Navarro Kresse said. “We need a place where students from different backgrounds, including women and LGBTQ, can learn more about their identities and meet others so they can form a support network.”

Chris Meiers, vice chancellor for Student Affairs at WSU Tri-Cities, draws inspiration from Navarro Kresse every day and said her contributions to the Inclusion Center will be a lasting-legacy on campus for many years to come.

“Her energy, compassion, and drive to make the campus and community a better place personifies everything about what make the Cougar nation and the Tri-Cities campus special,” he said.

Getting involved is nothing new for Navarro Kresse. She served as student body president at Yakima Valley College (YVC) in Grandview before transferring to WSU. Once here, she joined ASWSUTC as director of legislative affairs and was elected vice president last year, a position she holds again this year. Among Navarro Kresse’s many commitments, she serves on the Executive Policy (EP)-15 Working Group, a systemwide team dedicated to improving the policy that prohibits discrimination, sexual harassment, and sexual misconduct at all WSU locations.

She also became a strong advocate for Title IX, a federal policy that prohibits discrimination in education based on a person’s sex.

“I was serving as the vice president of diversity affairs for the Washington Student Association and felt as though I could make a positive impact through my position,” she said. “Title IX advocacy is essential for student safety and equity.”

She reached out to professors Katie Banks and Tracey Hanshew to create a special political science/history 499 course that taught the history of Title IX and how it evolved into the comprehensive policy we have today. After taking that class, Navarro Kresse teamed-up with the ASWSUTC Director of Legislative Affairs Akanna Poor to create an event called “Condoms, Consent, and Chicken Nuggets,” which provided students an opportunity to have difficult conversations about consent and ask questions to a panel of experts. At the same time, she worked with WSU Tri-Cities Chancellor Sandra Haynes to create a committee to review Title IX compliance and commitment to equity in education. 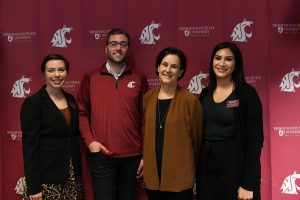 In August, Navarro Kresse worked with Holly Ashkannejhad, director of WSU’s Office for Civil Rights Compliance and Investigation, to arrange training for student leaders on the university’s policy prohibiting discrimination, sexual harassment, and sexual misconduct, as well as WSU’s grievance and investigation procedures.

“Through this training, Savannah created another resource for students – campus leaders who are knowledgeable about these processes and who can help fellow students identify the best resource for them,” Ashkannejhad said. “Her leadership will have a ripple effect throughout the community, and we are already seeing the positive impact she is having on the Tri-Cities campus.”

For someone who has fully immersed herself in the student experience and has plans to attend law school after graduating from WSU, it is difficult to fathom that Navarro Kresse never gave going to college a thought while growing up in Sunnyside, Washington. She had never met anyone who had gone to college. At a young age, she and her two sisters were adopted by her uncle and aunt who already had seven children of their own.

“My uncle worked at a fruit processing plant during the night and joined us kids in the fields at five in the morning to cut asparagus before school,” Navarro Kresse said. “He taught me what it means to have a strong work ethic and to care for others.”

Navarro Kresse was a good student, but the birth of her son at the end of her senior year in high school completely changed her life. Not wanting to burden her family once her baby was born, she dropped out of school and moved out of her uncle’s house at age 17. Needing a way to support herself and her baby, she learned to be a welder and earned her certification. For the first time in her life, she was making decent money, enough to allow her to pursue a GED (General Educational Diploma) during her spare time. Then her life took another unexpected turn. One day at work a heavy beam crushed her foot. The injury was serious and prompted her to look for a safer line of work. Eventually she landed a job as a dental assistant. Money was a lot tighter then, but she continued to save whatever she could to be able to take the series of GED tests. It took her seven years to complete her GED.

“To this day I consider that to be my biggest accomplishment,” she said. “It showed me that if I set a goal, really work hard and not give-up, I can reach it.”

Deserve to be here

Inspired by her sister who enrolled at YVC and armed with a newfound confidence in her academic abilities, Navarro Kresse took the plunge into higher education and the rest is history. Now 30 years old, married, and a mother of four, her unique background helps motivate her to get the most out of her education at WSU, and she has this advice for other first-generation students.Grand opening

“If you were able to get through the doors of this university, you deserve to be here,” she said. “Your experiences and perspectives are important and deserve to be shared, you shouldn’t be afraid to share your struggles. Please know that you are not alone, we’re all trying our best to get that diploma.”

Each campus in the WSU system provides programs and services that help meet the unique needs of first-generation students. In May, the national Center for First-Generation Student Success, an initiative of the Student Affairs Administrators in Higher Education (NASPA), named WSU a First Forward institution for its dedication to service first-generation college students.