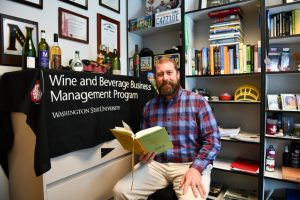 Established in 2015 in honor of WSU Professor Emeritus Don Smith (“the Coach”), the position, supports a faculty member who most embodies Smith’s spirit: an outstanding teacher, strong mentor, and accomplished industry professional. Smith passed away in 2016, just a few months prior to be inducted into the WSU School of Hospitality Business Management Hall of Fame in 2017.

Marlowe, who leads the wine and beverage business management program at WSU Tri-Cities, was named for his strong contributions in teaching, service and research, as well as his ongoing industry connection over his five years with WSU.

“Byron is someone that exemplifies the legacy of Don Smith within the School of Hospitality Business Management,” said Bob Harrington, director of the school. “He is a distinguished teacher, researcher and closely connected to the hospitality and beverage industries.”

Honored to be associated with Don Smith’s legacy

Marlowe said his career and life share a few parallels with Smith’s.

“Receiving the Don Smith Professorship is a blessing.  I’m originally from Indiana; Don, from Illinois.  I played college football; so did he. I’ve taught in a chateau in Lyon, France; he owned and operated the Chateau Louise in West Dundee, IL. I’m a Kentucky Colonel, and he worked for Kentucky Fried Chicken corporate. He was the CEO of Shakey’s Pizza Parlor; I take my kids there after I coach their games,” he said. “On behalf of his family, friends, former students, and colleagues, I look forward to trying to fill the shoes Coach left at WSU.”

The professorship provides Marlowe with additional funding per year to support research and teaching expenses.

“The professorship will allow me to be more visible in the world of hospitality management education, as well as food and beverage business management.  Don taught at two other universities besides WSU and was recognized as a Conti professor at Pennsylvania State University,” said Marlowe. “Alumni from those universities still credit Don with much of their success. His contributions were invaluable and unquantifiable. I’m so honored to be associated with his legacy.”

Marlowe is an international business fellow in the Carson College and faculty of both the Graduate and Honors Colleges at WSU Pullman. Recently, he was named a Fulbright Scholar and will teach and conduct research next year at the IMC University of Applied Sciences Krems in Krems an der Donau, Austria.

Some of his highest achievements include facilitating the growth and success of the online Wine Business Management Professional Certificate program, working with industry to create the 2019 Graduate Golden Ale that funds student scholarships, drawing multiple media attention toward the beverage industry, and creating the “Coach’s Cup” Intercollegiate Wine Business Competition. He has developed new courses, is the lead faculty member in the interdisciplinary Washington Wine History project, and is a highly respected consultant in the wine and beverage industry.

Marlowe is known for his research impact and leads SHBM clinical professors in research productivity with 10 refereed journal articles in the past four years (including three in one of the top hospitality publications), five book chapters, and “Wine Sales and Distribution: The Secrets to Building a Consultative Selling Approach,” a textbook that earned the 2020 award for “Best Book for Professionals” by the Gourmand International Cookbook Awards.

“Undoubtedly, the professorship will help me serve the Carson College of Business, the School of Hospitality Business Management, and, most importantly, my students, due to the experiences I will have as the Don Smith Professor at WSU in the future,” said Marlowe.