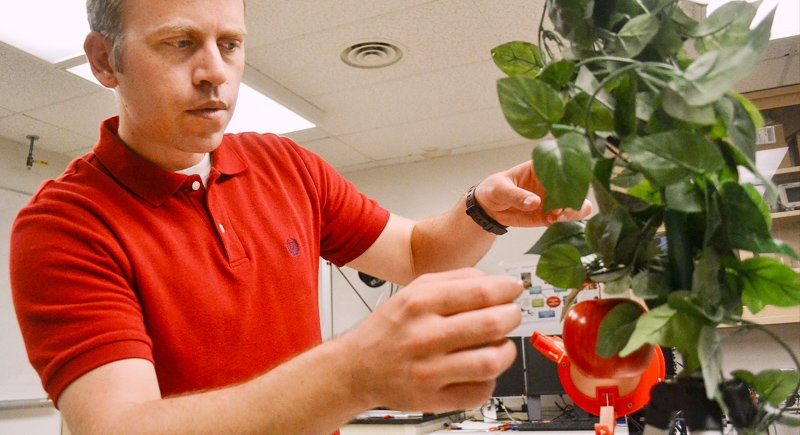 Many agencies have tried to create a device that will help with the picking process – a machine that is both gentle enough and picks fast enough to make it economically viable for commercial use – but have been unable to do so.

Engineers and scientists at Washington State University Tri-Cities and the WSU Center for Precision and Automatic Agricultural Systems (CPAAS) are creating a practically adoptable robot that will pick apples as efficiently as people.

The U.S. Department of Agriculture awarded a research team from WSU a $548,000 grant in 2013 as part of its National Robotics Initiative. The team hopes to test a working prototype as early as this fall in an orchard in Prosser, Wash.

Unlike in factories and other industrial applications, apples require a system that is delicate enough to pick the fruit without bruising it, while also maneuvering around tree branches, leaves and other obstructions, said Manoj Karkee, principal investigator on the project and WSU assistant professor of biological systems engineering.

“That’s why it is more challenging and difficult compared to the robotics we have in industrial applications,” he said. “It does not mean we cannot learn from what we have seen or known in the industrial environment, but it takes much more creative solutions to make it happen in orchards.”

Karkee said he believes he and his team have taken a unique approach compared with others who have investigated robotic apple-picking.

Karkee is working with project co-investigators Qin Zhang, CPAAS director, and Karen Lewis, WSU regional tree fruit specialist, to approximate how the robot should move and manipulate to be most efficient and cause the least damage to the fruit and tree.

Working with Changki Mo, assistant professor of mechanical engineering at WSU Tri-Cities, the team is focusing on the complementary nature of robots and humans to complete the apple-picking system.

“We are trying to use some level of human assistance in a co-robotic environment,” Karkee said. “The robot would do about 95 to 98 percent of the job, but the remaining 2 percent would be done in assistance by a human operator. That makes it, at least in my opinion, possible to see the level of accuracy and productivity that we need to achieve.”

The robot features an arm and “hand” in which eight motors operate in congruence with a vision system to delicately grasp and twist the fruit off the tree as a human does.

The robot’s vision system incorporates cameras and sensors to capture an image of the tree. Using algorithms to identify color, shape and texture, it differentiates fruit from the rest of the plant and determines fruit location so the robotic arm can be directed for picking.

Hope for the future

Karkee said he is pleased with the progress and is optimistic about the team’s prototype that could be used for commercialization in the near future.

“This is one of the most challenging problems that scientists and agricultural engineers are dealing with right now,” he said. “Based on what we know, it is really promising. We really think we have something.”

He said if they succeed in creating an apple-picking robot, it could potentially save growers millions in Washington’s multibillion dollar apple industry.

“(Apple picking) is labor intensive, costly, risky; there are not enough laborers to do it and it is seasonal,” he said. “All of these factors encourage us to develop a machine. These are recognized problems that farmers, local bodies and the federal government are all trying to solve. We hope to be the solution to that problem.”