A collection of underground comics are featured this month as part of a new exhibition at the Washington State University Tri-Cities Art Center.

The exhibition, titled “A life Underground: Exploring WSU’s Alternative Comix Collection,” will be on display through April 30 at the Art Center in the university’s Consolidated Information Center (CIC) building. 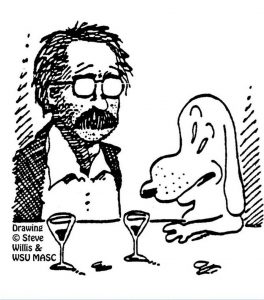 All the comics featured in the exhibition are prints made from archived publications, featuring works from the “Steve Willis Comix and Small Press Collection” and the “Lynn R. Hansen Underground Comics Collection.” The comics are regularly housed at WSU Pullman’s Manuscripts, Archives and Special Collections department.

A reception is being held from 5 p.m. – 8 p.m. Thursday, April 6, in the WSU Tri-Cities Art Center. The event is free and open to the public.

The exhibition was organized by Adam Whittier, a WSU Tri-Cities digital technology and culture student, who discovered the collection while participating in a conference at WSU Pullman. Whittier also received the help of Robert Franklin, an adjunct instructor, historian and assistant director of the Hanford History Project at WSU Tri-Cities, to curate the show.

A comic book fan, himself, Whittier said he wanted to bring the underground publications to light so that they may be used as a resource for students and community members.

“Comics are one of the most important, engaging and inclusive forms of media that we have available to us, as they have a way of bringing people together, and of being profound, simple and beautiful all at the same time,” he said. “Underground comics of the type in the archives are a snapshot of a peculiar period and worldview, preserved for the exploration and wonderment of future generations.”

Whittier said the collections are difficult for students from other WSU campuses to explore, as the publications are located in Pullman. But with the exhibit, he said he hopes to expose individuals to the diversity and range of underground comics and culture.

“We have a tremendous resource in these collections, and it would be an affront to the art and creativity of the underground cartoonists not to appreciate and share it,” he said.