November 7, 2017 Students host Day of the Dead event to promote culture and honor loved ones at WSU Tri-Cities

Posted at 08:48h in Student, WSUTC News by Maegan Murray

RICHLAND, Wash. – The Associated Students of Washington State University Tri-Cities, Dreamer’s Club and the World Research Club partnered to host a Dia de los Muertos celebration, or Day of the Dead as it is translated to in English, this month to promote the Mexican culture and give students the opportunity to experience a different kind of celebration. 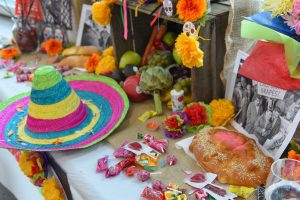 Dia de los Muertos is celebrated throughout Mexico and other parts of Central and South America during the days of Oct. 31 through Nov. 2 every year. The celebration brings together family members and friends to pray for and remember the people in their lives that have died.

The celebration originally took place in the beginning of summer before the 16th century, but gradually evolved to its current celebratory days to coincide with western Christianity’s celebration of All Saint’s Day and All Soul’s Day. 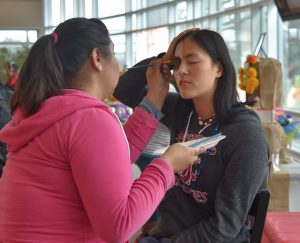 During the celebration, individuals build altars to commemorate their lost family members and fill them with different foods and items of their departed member’s liking.  The clubs chose to honor both individuals who had ties to the Tri-Cities and WSU community who have passed, in addition to well-known individuals in the Mexican culture who are now deceased. Some of those people included former WSU President Elson Floyd and civil rights activist Cesar Chavez, artist Frida Khalo and writer Nellie Campobello, who are all well-known in the Mexican culture.

The altars displayed food, clothing and items that were favored by the deceased during their lives.