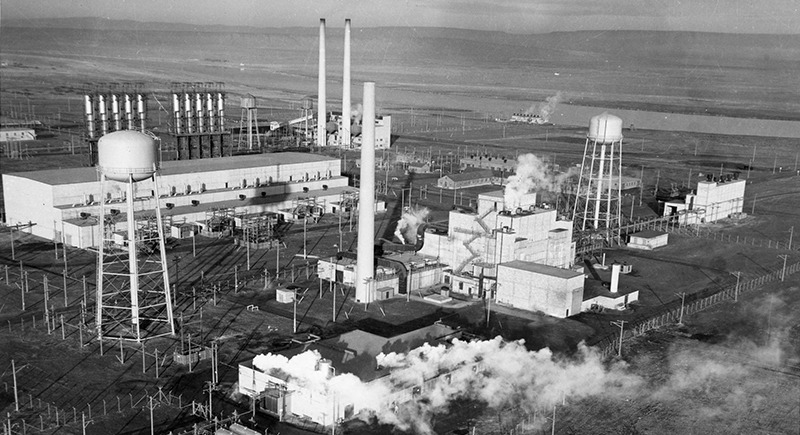 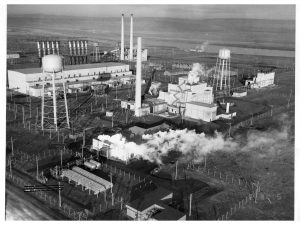 RICHLAND, Wash. – In celebration of the 75th anniversary of the Hanford Site, Washington State University Tri-Cities’ Hanford History Project will host and partner to offer several activities throughout the month of September that provide a glimpse into the unique history of Hanford and impact that it has had on the region, state and world.

“Hanford is a unique place with unique history,” said Robert Franklin, assistant director of the WSU Tri-Cities Hanford History Project. “It is also a really complicated place with a complicated history, but that is what makes it interesting. It had a huge impact on the development of the city of Richland, and it had an impact on the rest of the world.”

Hanford is the location of the world’s first large-scale nuclear reactor, the B Reactor, which also made the plutonium for the “Fat Man” nuclear bomb that was detonated over the Japanese city of Nagasaki in 1945 during World War II. It led to the creation of a variety of scientific and engineering discoveries and development of technology. It is now the site of the one of the world’s largest nuclear cleanup efforts.

“This is a great opportunity to learn more about Hanford and its impact, especially on the regional Tri-Cities community,” Franklin said. “We want to make people more aware of just how accessible historical resources for Hanford are in our local community, and we want to bring that history to our community.” 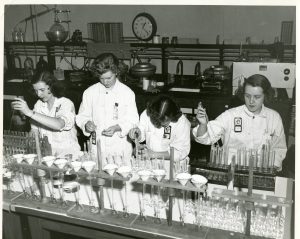 Hanford employees work in a lab out at the site.

“People of the Manhattan Project: Building an Atomic City” exhibition

Festivities will open the month with a “People of Manhattan Project: Building an Atomic City” exhibition at WSU Tri-Cities that will feature a range of artifacts from the U.S. Department of Energy’s Hanford Collection and the Hanford History Project’s extensive collections.

A grand opening will be held 5 p.m. – 7 p.m. on Sept. 5 in the Consolidated Information Center Art Gallery at WSU Tri-Cities, which is open to the public.

The gallery will be open during regular campus hours through the beginning of October 2019. 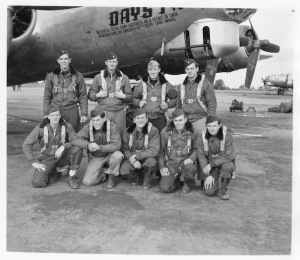 Individuals will be treated to a rare occasion when descendants of the crew who worked on the Day’s Pay Bomber will discuss the role of their parents in the war and the impact that Hanford employees made on the war effort.

The Day’s Pay is a large part of local history related to Hanford and the war effort, Franklin said. On July 23, 1944, Hanford Engineer Works employees each gave a day’s worth of their pay to purchase the B-17 bomber for the war effort, which is where it gets its name. It flew more than 60 missions in Europe.

Artifacts will be on display as part of the presentation, and individuals will get to view a rare clip of the plane being christened at the Hanford Construction Camp back in July 1944. 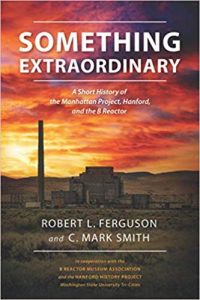 Book cover for “Something Extraordinary – A Short History of the Manhattan Project, Hanford and the B Reactor.”

“Something Extraordinary – A Short History of the Manhattan Project, Hanford and the B Reactor” book launch

Local Tri-Cities independent historian C. Mark Smith and former Hanford physicist Bob Ferguson will discuss their new book “Something Extraordinary – A Short History of the Manhattan Project, Hanford and the B Reactor” during a launch from 4:30 p.m. – 6:30 p.m. on Sept. 13 at the Manhattan Project National Historical Park Hanford Unit Visitors Center, 2000 Logston Blvd. in Richland.

The book provides a concise, but comprehensive narrative of the geopolitics and atomic research that led to the creation of the Manhattan Project.

Ferguson began a career in the nuclear field when he joined General Electric at the Hanford Site in 1957 where he trained and worked as a reactor physicist and reactor operations supervisor at the B Reactor. His career spans 60 years in the nuclear energy field, where he was also appointed the first Deputy Assistant Secretary for Nuclear Energy Programs for the U.S. Department of Energy from 1978 – 1980 during President Jimmy Carter’s administration.

Smith spent 40 years managing economic development organizations at the local, state, and federal level. He is a Fellow Member and Honorary Life Member of the International Economic Development Council and received a Lifetime Achievement Award from former Washington Gov. Gary Locke in 2004. Smith retired in 2005 and began a new career as the author of a series of books that combine history, biography, and politics in 2008. 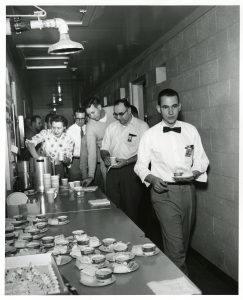 Hanford employees are treated to refreshments out at the site.

The City of Richland and other community partners, including the Hanford History Project, are hosting “Atomic Frontier Day,” a family-friendly event that honors a community event popular in the early days of Hanford.

The day will bring back to life the 1940s era with music, games, a mess hall dinner, storytelling and Hanford-related exhibits. A parade will also begin the day at 11 a.m. along George Washington Way. For the full schedule, visit https://www.facebook.com/events/505640273306386/.

“We are recognizing Richland’s history and its connection to atomic history,” Franklin said. “We are not celebrating the bomb, but rather having a community celebration that remembers the burst of activity that created the City of Richland.”