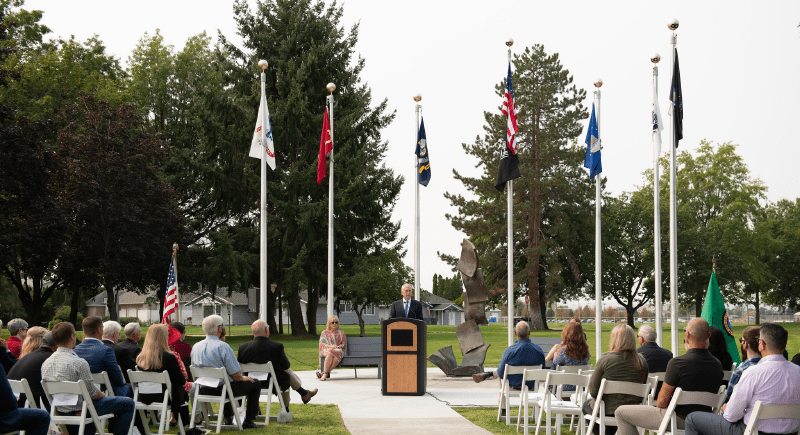 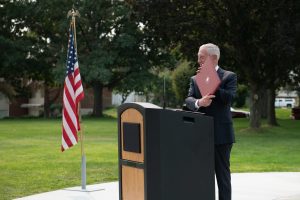 “This memorial refresh is many years in the making and represents two key attributes of this campus – inclusivity and respect,” Chancellor Sandra Haynes said.

She said veterans have a large impact on the campus, as well as their fellow WSU Tri-Cities students. The expansion of the Stories Veterans Memorial and establishment of the General James Mattis Leadership Library, she said, is a special tribute to them and their service.

“Veterans enter the classroom with leadership skills,” Haynes said. “They have a strong work ethic that centers on team building and problem solving. Veterans are self-motivated and have a global perspective that informs the learning of other students … WSU Tri-Cities is proud to be able to serve them.”

The “Stories” Veterans Memorial, created by local artist Tom McClelland, features a collection of stories from regional veterans. With the expansion, the memorial now includes a larger concrete base that houses benches donated by the Schmieman family in honor of their late son Sgt. Dietrich Schmieman, as well as flag poles that display the American and U.S. military branch flags. The expansion and improvements were made possible by Cliff Thorn Construction, as well as Legacy Excavation, 1st Place Concrete and Absolute Power TC. 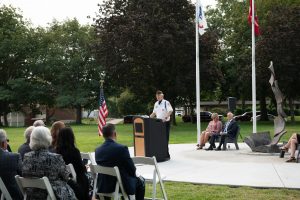 Art King, chaplain for the Veterans of Foreign Wars Post 5785, speaks to the significance of the Stories Veterans Memorial expansion as part of a dedication this week.

As part of the unveiling of the Stories Veterans Memorial, Mattis and other invited guests presented on the importance of the memorial, paying tribute to regional veterans who bravely gave of their lives, as well as all those who have and continued to serve.

“For me to be here, frankly, back in my hometown and recognizing veterans, is because I owe them so much,” Mattis said as part of his remarks. “I have a debt that I owe that I can never fully repay. We all owe them a debt for the freedom we are enjoying right now.”

Mattis said the fact that the memorial is located on the WSU Tri-Cities campus is especially important.

“At WSU Tri-Cities, it reminds us of our relevance for the forward-looking community,” he said. “As one that wants to sustain growth in the quality of life, it’s got to provide educational opportunities – that’s the way of the world and has been, forever. Plus, there’s the traditional role of our colleges, which is long-standing in our democracy to breed good citizens.”

As part of his remarks, Art King, chaplain for the Veterans of Foreign Wars Post 5785, paid tribute to five military veterans, one of which one included Sgt. Schmieman, who died alongside fellow service men and women when their cargo plane crashed in Mississippi.

“Dietrich was remembered for doing the right things with joy, treating all people fairly with love, kindness and a smile, helping encouraging others and giving his best,” King said. “Dietrich was a gifted young man with lots of choices in life, and he chose to serve his nation.”

A rock displaying a quote from Schmieman is now located alongside the Hero Tree on campus, which is planted next to the Stories Veterans Memorial.

King said the expansion of the memorial at WSU Tri-Cities reinforces the university’s commitment to its regional veterans.

“WSU Tri-Cities takes great pride in the veterans of this community,” King said. “The support goes across several administrations and continues with Chancellor Haynes. This whole ceremony is a reflection of the support.”

The “Stories” Veterans Memorial is located along the Columbia River path on the WSU Tri-Cities campus, where individuals may stop and reflect. Individuals are also invited to sign a stone in honor of a loved one who served and place it at the base of the Hero Tree – planted next to the memorial.

Following the unveiling of the memorial, guests headed to the unveiling of the General James Mattis Leadership Library now located in the WSU Tri-Cities Veterans Center. The library features a collection of Mattis’ favorite books that have been influential throughout his career. The library was made possible by C. Mark Smith and the Richland Rotary Club of the Tri-Cities, who led fundraising efforts for the library. 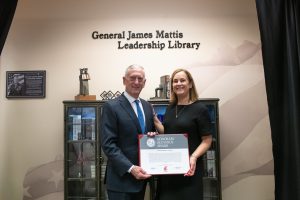 Mattis, a Tri-Cities native, served as a four-star general with the U.S. Marine Corps and as 26th U.S. Secretary of Defense from 2017-2019. During his 44 years in the U.S. Marine Corps, he commanded forces in the Persian Gulf War, the War in Afghanistan and the Iraq War.

“The epitome of leading lies in serving others, and that is what those books are about – is serving others. Or, in young Sgt. Dietrich’s words, ‘To make the lives of others better,’ ”Mattis said as part of his remarks. “Here in this library are the many folks that have guided me in the good times and bad … These books can take away a lot of sophomoric mistakes. You can learn how other people dealt, successfully or unsuccessfully, and how men and women confronted the same basic challenges that we confront and how they dealt with those.”

WSU Tri-Cities alumnus Benjamin Bush spoke on the significance of now having the General James Mattis Leadership Library located in the Veterans Center, as well as what such a center means for WSU Tri-Cities veteran students.

“I can’t express to you guys enough just how much this space means to us,” he said.

For more information on how to give to support veteran students, contact Kelly Gabel, WSU Tri-Cities development coordinator, at 509-372-7398 or kelly.gabel@wsu.edu