Posted at 06:00h in Uncategorized, WSUTC News by Maegan Murray

RICHLAND, Wash. – It has been exactly 30 years to the day since the Washington state legislature established Washington State University Tri-Cities, in addition to WSU campuses at Spokane and Vancouver and University of Washington campuses at Bothell and Tacoma. 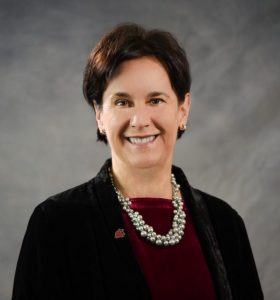 These university locations, formerly known as branch campuses, were approved by the state legislature as a means to provide educational access to those across the state who are unable to attend or relocate to Washington State University Pullman and University of Washington in Seattle, but still want and need a local option for a prestigious university education. 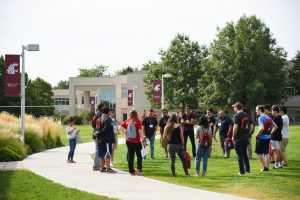 WSU Tri-Cities students partake in an orientation activity this fall.

“Because most of the state-supported baccalaureate universities are located in areas removed from major metropolitan areas, the legislature finds that many of the state’s citizens, especially those citizens residing in the central Puget Sound area, the Tri-Cities, Spokane, Vancouver and Yakima, have insufficient and inequitable access to upper-division baccalaureate and graduate education,” reads the certification of enrolled enactment that signed branch campuses across Washington into existence on May 10, 1989. “The legislature […] endorses the creation of branch campuses for the University of Washington and Washington State University.”

Combined with partnerships with our local community colleges, university education access in key regions across the state has grown tremendously. While we no longer refer to ourselves as branch campuses, but as fully-fledged WSU campuses, we reach individuals across the state. WSU Tri-Cities continues to grow educational needs of our constituents of our region.

As a land-grant institution, it is our aim to support our regional communities. We continue to rethink ways in which we can continue to meet regional demands. This has been a focus since our beginnings well before our establishment in 1989 as an official WSU campus. This is also a focus of our strategic planning this year that will detail the foundational plans for the future of WSU Tri-Cities.

A history of supporting the mid-Columbia 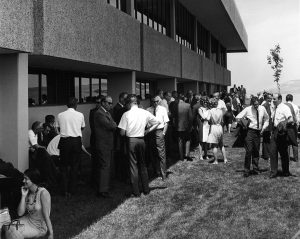 Individuals gather for an event at WSU Tri-Cities in 1958.

The history of WSU Tri-Cities dates back to before our establishment as a singular WSU campus. Our origin begins in 1946 where we were established as the General Electric School of Nuclear Engineering. The school was a partnership effort between WSU, UW and Oregon State University to offer graduate-level engineering programs to prepare and benefit the Hanford Site workforce, which had just developed the world’s first large-scale nuclear reactor.

In 1968, we became the Joint Center for Graduate Studies, which under then new director, George Garlick, moved from our original location on Lee Boulevard in Richland, to our first building where we currently reside, known as the East Building, on land donated by the Atomic Energy Commission. In 1985, WSU, UW and OSU were joined by Central Washington University and Eastern Washington University to form a five-university consortium called the Tri-Cities University Center. 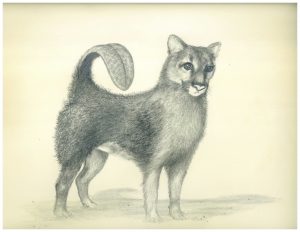 In 1989, WSU Tri-Cities was singularly established as a result of the support of the mayors of Richland, Kennewick and Pasco and under the direction of campus dean Jim Cochran. We were established as a singular WSU campus in an effort to provide extensive programming focused on the land-grant mission to directly support and educate our regional community and beyond. 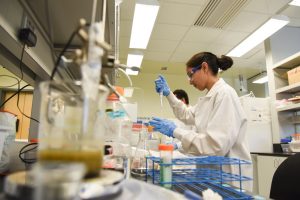 Students work in the Bioproducts, Sciences and Engineering Laboratory at WSU Tri-Cities, which was constructed and is utilized in partnership with the Pacific Northwest National Laboratory.

Our research extends to most areas of the community, of which a few include:

We have implemented a range of programs to extend opportunities to attend college locally in the Tri-Cities. A few years ago, we implemented a running start program that welcomes high school juniors and seniors to take classes at no charge right here at our WSU Tri-Cities campus. We lead regional GEAR UP, a program implemented in our local schools to prepare students in the K-12 system for college, as well as lead a 21st Century Community Learning Centers program that provides after school and extracurricular programming in K-12 local schools. 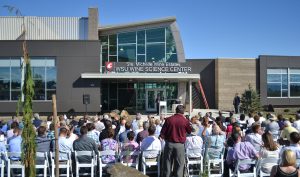 A few years ago, our students voted to assess a fee on themselves in order to construct a facility that would be entirely student-centric – a facility that we have now realized as our Student Union Building.

And now, we have a new academic building in our sights.

The Washington state Legislature recently approved the full funding for a new $30 million academic building at WSU Tri-Cities. With this new building, we have the potential to expand our offerings to local and regional students by means of providing them with state-of-the-art laboratory, classroom, study and meeting spaces that are suited for a university in the heart of the Tri-Cities Research District. Preliminary site work will begin in October and construction will be completed in spring 2021. This is a crucial facility to our future success as a university campus, and especially for adequately preparing our students. This is also a facility that will serve ALL of our students. 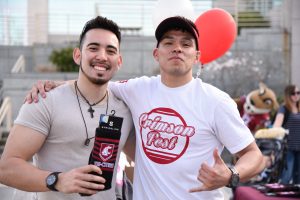 A great time to be a WSU Tri-Cities Coug

What we are doing is working. The majority of our students that graduate from WSU Tri-Cities, stay in our Benton and Franklin counties, further supporting our regional economy. And more than 90 percent of students surveyed are also employed within six months of graduation. This is a trend that we would like to see continue.

We have a bright future ahead and we will continue to grow our offerings, restructure our programs to suit community needs and expand innovations to benefit our local community. It is certainly a phenomenal time to be a WSU Tri-Cities Coug! Happy 30th anniversary, WSU Tri-Cities! Go Cougs!