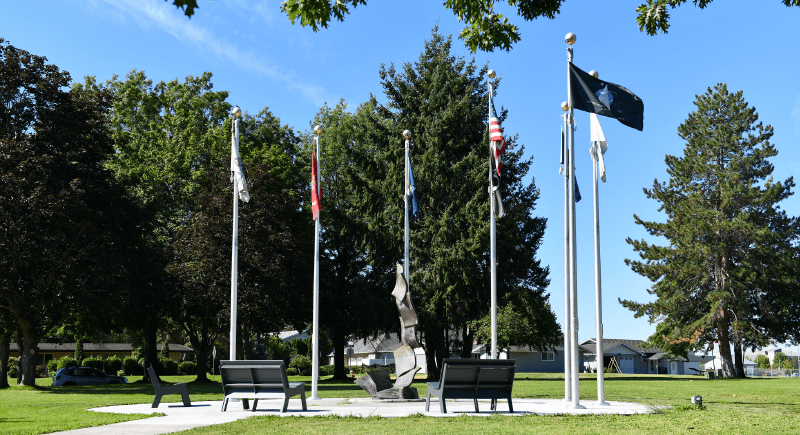 The event will begin at 11 a.m. with an outdoor ceremony at the “Stories” Veterans Memorial, located adjacent to the East Building on campus. It will feature remarks by:

During the ceremony, an honor guard will conduct a presentation of the colors. Guests will also be invited to sign river stones in memory of loved ones who have served. The stones will be placed at the base of the Hero Tree, which was planted in 2016 near the memorial in honor of regional veterans.

Following the “Stories” Veterans Memorial dedication, attendees will move to the campus Veterans Center for the official reveal of the General James Mattis Leadership Library – a new permanent installation featuring Mattis’ favorite books that have been influential to his career. In-person attendees will also receive a signed copy of his most recently released book, “Call Sign Chaos.”

“We are fortunate to have many veterans as part of our WSU Tri-Cities community, representing students, faculty, staff, community volunteers and contributors,” Chancellor Sandra Haynes said. “The expansion of the ‘Stories’ Veterans Memorial, as well as the installation of the General James Mattis Leadership Library, are in tribute to the service of our veterans, as well as those who made the ultimate sacrifice in defense of our country.”

Members of the media invited to attend

While a private event, members of the media are invited to attend.

At the event, Mattis will take questions from the media that specifically pertain to the WSU Tri-Cities “Stories” Veterans Memorial, Veterans Center and General James Mattis Leadership Library.

The “Stories” Veterans Memorial, created by local artist Tom McClelland, features a collection of stories from regional veterans. With the expansion, the memorial now includes a larger concrete base that houses benches donated by the Schmieman family in honor of their son Dietrich Schmieman, as well as flag poles that display the American and U.S. military branch flags. The expansion and improvements were made possible by Cliff Thorn Construction, as well as Legacy Excavation, 1st Place Concrete and Absolute Power TC.

“We are incredibly grateful to Cliff Thorn Construction, the Schmieman family and the several other companies that generously gave of their time and resources to make this project possible,” Haynes said. “The memorial serves as a striking tribute to our veterans. It offers a place for individuals to sit, reflect and appreciate the sacrifices and underlying stories of our military heroes.”

The General James Mattis Leadership Library is housed in the recently renovated WSU Tri-Cities Veterans Center. The library was made possible by C. Mark Smith and the Richland Rotary Club of the Tri-Cities, who led fundraising efforts for the library.

Mattis, a Tri-Cities native, served as a four-star general with the U.S. Marine Corps and as 26th U.S. Secretary of Defense from 2017-2019. During his 44 years in the U.S. Marine Corps, he commanded forces in the Persian Gulf War, the War in Afghanistan and the Iraq War.

In Mattis’ own words, as noted on a plaque in his honor in the Veterans Center:

“Thanks to my reading, I have never been caught flat-footed by any situation, never at a loss for how any problem has been addressed (successfully or unsuccessfully) before. It doesn’t give me all the answers, but it lights what is often a dark path ahead.”

“We are grateful not only for General Mattis’ contributions throughout his storied military career, but also his dedication to our regional veterans,” Haynes said. “He has been a champion for our students in their pursuit of earning a higher education after their military service. His inspiration from his favorite books will also serve as inspiration to our students.”

For more information on how to give to support veteran students, contact Kelly Gabel, WSU Tri-Cities development coordinator, at 509-372-7398 or kelly.gabel@wsu.edu.